here's a card i have made for my new blogging friend hetty's "jewish card challenge" ...altho, my card is more of a "thank you card that incorporates some hebrew text"...since it has absolutely NO religious significance of any kind... (hetty--does that still count?) 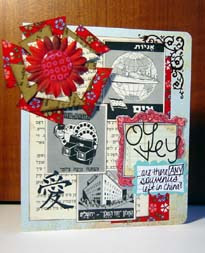 we could use use any jewish theme (i used some travel-related pictures from a hebrew workbook); we were meant to also include: at least one stamp (chinese character for love); at least one embellishment (compound flower); at least two layers (a page of hebrew text & a piece of origami paper); and a handwritten or stamped original title or greeting ("oy vey! are there ANY souvenirs left in china?!")
ok, so it's a really specific card, that hallmark will probably NOT be releasing a version of anytime soon! but my friend liz, who teaches chinese (...and also happens to be jewish...) just came back from shanghai with literally an entire gift bag of presents each for myself and our friend janet...and we were teasing her that there were probably souvenir shortages when she left! when i read hetty's challenge, i thought, "aha! i can make the world's quirkiest thank you card!" ...and so i did... (oh yeah, and i managed to work in a couple of little elsie bits, too!) :)
Posted by lauren bergold at 3:34 PM