oh noooooooooooooooo!
one of my fave blogs has finished: threadbared is bearing thread no more!!! imagine my grief & sadness! i had noticed that it was certainly a lot less active recently, but you know...in the height of summer...people are busy vacationing, and so forth; i assumed it would be back in action at some point. apparently not. bummer.
...but you know...the more i think about it...much as i'll miss them, i admire the threadbared girls for making a really tough decision. they had a blast for two years, but now they're involved in other things, and rather than letting the blog languish--or carry on half-heartedly--they have called it quits. actually, that's pretty cool.
so bye-bye, mary and kimberly, i wish you well in your future endeavors! thanks for two hilarious years and for leaving your archive intact, so i can continue to visit my boyfriend, the man in the leopard-lined--or is it paisley?--vest: 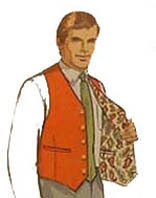 Posted by lauren bergold at 9:27 AM