this card was made by my youngest niece, madeline, last thanksgiving when she was 2 1/2: 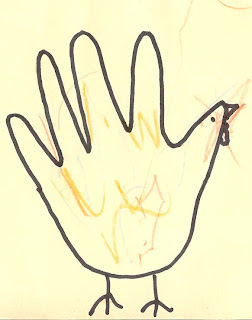 one morning in november, my sister discovered her with her left hand dangling off the edges of a post-it note pad, trying to figure out how to draw *in between* the fingers with a (luckily firmly capped) sharpie marker, and muttering, "i hafta do dis! i hafta do dis!" pretty quickly amie figured out what the deal was--apparently turkeys had been the previous day's project at pre-school--and helped with the outlining so maddie could concentrate on the important design decisions, like coloring.
i happened to phone up during this process, and after telling amie whatever i called for, got passed along to the small one for her turn to talk:
maddie: hi aunt lawn!
lauren: hiya babe, whatcha doing?
maddie: i makin' a cawd...for you and your friend untle jeff!
which is why...9 months later...the cawd in question is still on my fridge! :)
**************************
ps: speakin' of art that astounds and amazes one; my in-laws sent this along in an email this morning. if you need me, i'll be at the beach!!! :)
Posted by lauren bergold at 8:51 AM