that may not be their official name, but i don't know what else to call them. they are hand-held, heavy cardboard fans that usually have artwork on one side and advertising info on the other. mostly, the advertising is for a funeral home, which is where i guess a lot of them were given away. i think the ones i have are mostly from the 40's and 50's. which makes sense: in the years before air-conditioning, if you were going to be at, say, a viewing, for several hours, in your dress clothes (& probably a hat & gloves, in those days) you might well be slightly warm, after a bit. hence the fan. and wouldn't a lovely mountain scene, or a picture of jesus, be comforting to look at, in such sad circumstances??!

i found my first one at a garage sale a few years ago and just fell in love with it. heck, as we know, i like paper, generally, and vintage paper especially! i like old books, and those souvenir pamphlets you get at tourist attractions, and i really REALLY like postcards... (but that's a whole 'nother blog entry!)

anyway, having found one, of course i had to keep looking, and thus a mini-obsession was born. i can go for months without really thinking about them, but if i find myself at a flea market or antique shop--especially one stocking vintage postcards & paper ephemera--i will ask hesitantly, "you don't have any...funeral home fans...do you?" sometimes i get a look from the proprietor. often i get one from my companion. in south pasadena, with my friend barb, i just got a smile. which i didn't think too much about, since barb's a happy kind of gal. a couple of days later, on my birthday, the smile made sense, right after i opened... 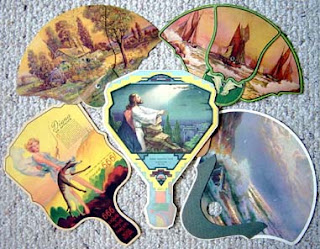 well, as you can imagine, i was stunned! i mean, a friend who takes you to see pre-raphaelite paintings and bakes you a cake on your birthday...by jingo, that's a good friend! one who does all that, and remembers that you collect funeral home fans...and finds some for you??! (and somehow--heroically--manages NOT TO REVEAL that fact when you are in an antique store together several days beforehand & they are mentioned...??!!)

i don't know what i've ever done in life to merit such a friend, but boy am i grateful!!!

Posted by lauren bergold at 8:51 AM