hooray! i've done another paper adventure page! i am halfway to caught up!!! here are the directions for this one, from elise:
"This week: Tell yourself about yourself in just three words."

at first i thought this would be impossible. and then, i suddenly remembered something lovely husband jeff said to me years and years and years ago... (so many years, in fact, that he was then still known as "lovely BOYFRIEND jeff"!) ...when i had said something that particularly amazed and amused him. for better or for worse--and it depends on the day, really--but, "you're too much" does pretty well sum me up!

whilst looking for a different photo from around that time (the early 1980's) i stumbled upon this one (from 1966) of a not-quite-2-year-old me, in my grandfather's office. it doesn't REALLY go with the quote. but jeff insists that when i am sitting at my computer, trying to think of what to write next, i still get this exact same expression on my face.

does this mean i've used *a thousand and three* words??! 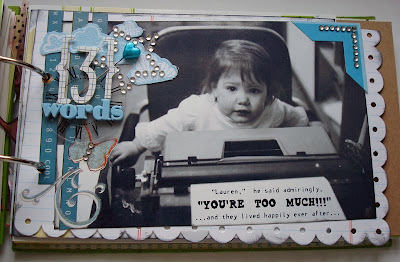