a. that i know what i'm doing
and
b. that i can convey it clearly to you

neither of which is particularly true. on the other hand,
"a bunch of random facts about those weird little distressed flowers i've been making lately...WITH PICTURES!" just seemed like such a bad title!!! :) so let's go with "tutorial", ok?

step one: getting started 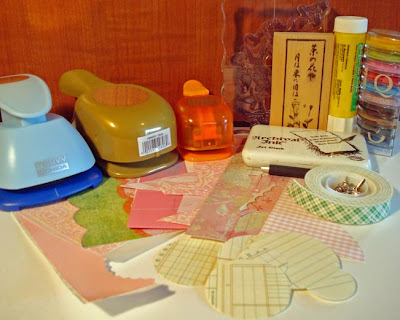 supplies i used: circle punches, paper scraps, various inks, a few stamps, foam tape, jewel brads, gluestick. of course, like most crafty things, you can make these in LOTS of ways...i will tell you what i *did*...rather than what you SHOULD do! 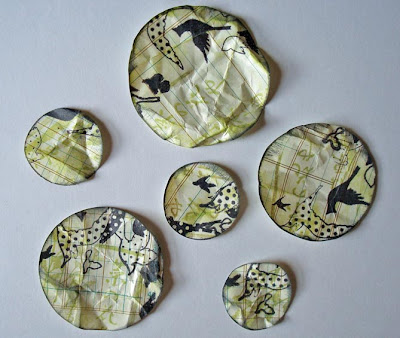 does it seem a bit backwards to do the insides first?! well, i s'pose it does...but since we are going to "wing it" with our flower shapes...and since i never have ANY idea how big to make the outsides to fit my circle punch sizes...i generally do the centers first.

in this case, i punched them and then stamped on them using pale green ink on the chinese characters stamp, followed by black ink on the birds. i wadded them up...unwadded...wadded again...and unwadded till they were nice & wrinkly! i inked the interior wrinkles with the green chalk ink; inked the edges randomly with black, and called it a day. 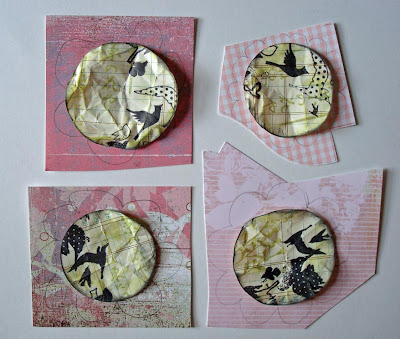 i generally make these mid-project to fit in a specific space, so at this point i calculate the area i want the flowers to fit in & arrange the circles there to get an idea of the sizes needed. then i take each circle off, place it on a scrap of patterned paper & draw the flower shape around the circle lightly in pencil. the essential point, though, is: NEAT & EVEN are absolutely NOT what you're going for...try to be messy and off-center!!!
step four: cut it out 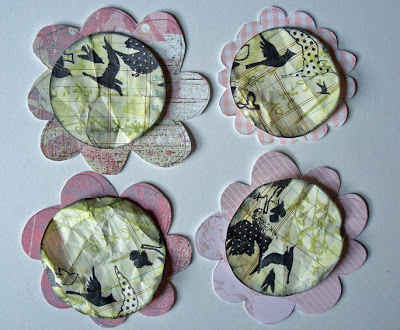 obviously, the next thing to do is make your shapeless blobs into vaguely flower-shaped blobs. cut out around outlines, trying *not* to be NEAT & SMOOTH!!! be fast. be jerky. try to leave some "flat spots". (if you are habitually tidy...like me...this is the hardest part! a moving vehicle on a bumpy road is a good place to practice!) (though YOU should probably not be the one driving said vehicle!) :) 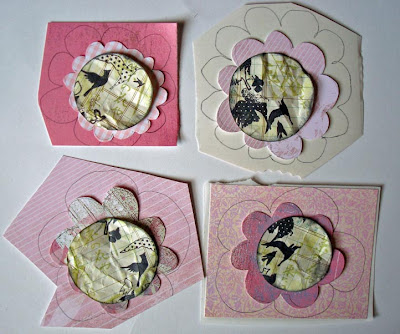 i suspect this step is pretty self-explanatory: but if you'd like your flowers to be particularly dimensional you can make either a second set of petals OR a second set of centers. this time i went with petals, so basically i just duplicated the previous step... 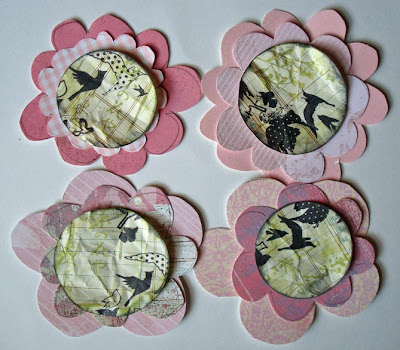 ...and they came out looking a bit like you see above! then i crumpled the petals a bit and inked the edges. 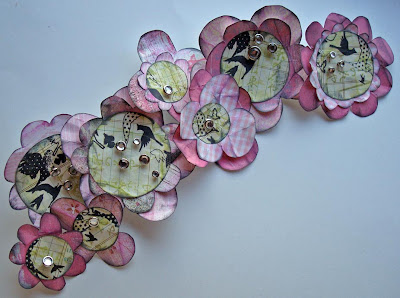 i attach the centers with glue, or staples, or brads, or...duct tape...? again, being in GRUNGE mode, i try to place them a bit off-kilter. once all the flowers are assembled, i arrange them on a card... (or whatever) ...and decide if some of them need to be raised up on foam tape. then all that is left is to attach the flowers... (in this case those brads are NOT just decorative!) ...and wait for the universal acclaim which is sure to be forthcoming! :)

to see how some of these particular flowers look in their natural habitat, scroll down to paper adventure operation 22!

*well, june and stef asked!
Posted by lauren bergold at 8:03 AM