the darkness just before the (pink & sparkly) dawn

lemme ask ya this: do you ever get about halfway through a project and have a crisis of confidence? when you look at all the bits you've completed (or worse yet, you look at all the bits you've half-completed) and they're so kind of pitiful and homemade looking that you think, "maybe i should just toss this and go buy something"? of course it doesn't help that the work always creeps along valium-addicted-tortoise slowly, while the deadline is a hyperactive hare...on rollerskates...with a 1950's sci-fi movie jet-pack! it's the paper-crafting equivalent of what douglas adams called "the long, dark tea-time of the soul".

on the lindsay birthday concoction, mine came wednesday night. in retrospect, i wish i had snapped a pic then, because it would have illustrated the phenomenon so much more effectively! as it is, you will have to trust me when i say that 36 hours ago, the scattered and just-starting-to-look-like-they-might-turn-into-something bits you see below were not just scattered, and not *remotely* looking like they might turn into something! ok, truthfully, i never really considered actually throwing it away...but it was tempting! 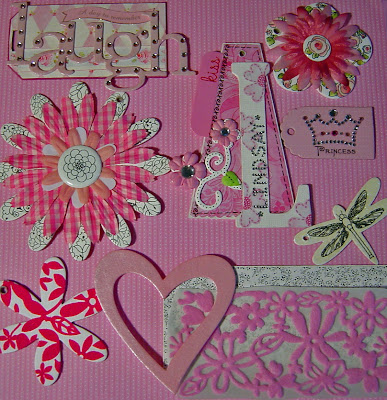 (the ingredients, so far; eventually all the bits--which are decorated on both sides--will dangle from a book ring, comprising a 3-D chipboard extravaganza full of birthday wishes!) (well, that's the plan, anyway!)

fortunately i've come to realize (with the occasional reminder from lovely husband jeff) that this feeling has descended on every project i've ever attempted which could not be completed in one sitting; and i know that mostly, the items in question did come together, eventually. not always as well as i had hoped...or as quickly...but they got done, they got given and they got appreciation from their recipients. all i have to do is keep going; all i have to not do is panic. (sometimes that last bit is the really tricky part!)

not too long ago, i realized the best advice i've ever encountered on the subject came from the late kniting/writing/teaching goddess elizabeth zimmerman, whose motto famously was,

"knit on with confidence, overcoming all obstacles"

words to live by, whatever your endeavors!

(ps to ms june: i *am* incorporating your challenge! the back of the "laugh" tag is plaid, and shall soon be prima-strewn!)
Posted by lauren bergold at 9:38 AM