noper, it's made o' yarn! bluesky's super-bulky, super-smooshy, 50% wool, 50% alpaca to be exact. this, my friends, is the cadillac of yarns, the wooly equivalent of flourless chocolate cake, the...ok, i can't come up with a third luxurious metaphor, but i think i've made my point: it's really, really nice yarn... 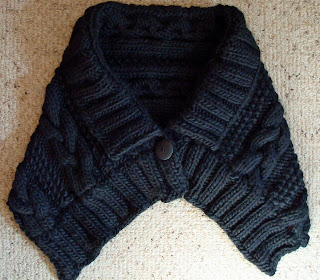 (the front)
the lady at the yarn shop called this pattern "big cabled stole" and i think you'll agree it lives up to its name! (ok, so she is better at designing & knitting stuff than she is at making up snappy titles) i have renamed it "big smooshy stole" (oh yeah, that's a real improvement!) 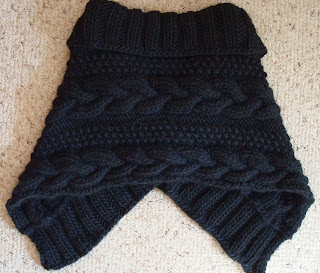 (the back)
i started it last autumn. by new year's it was 95% finished...and so it remained until friday. all it needed was for the ribbing on the last short edge to be picked up & 12 rows of ribbing knitted. why i didn't do that sooner is something of a mystery; but for some reason, i really only knit in cars or planes. yes, i'm a travel-knitter. (i s'pose in "real life" i nearly always have something else, more pressing, that has to get done.) 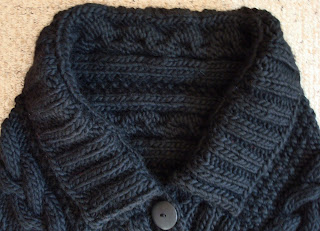 (the collar: note the smooth & tidy "picked-up-stitch" line, and the way it folds over and lays neatly; it took a couple of go's for that to happen...which is why i mention it, proudly...)
on friday morning, knowing that my friend liz would be driving us to the cloisters (on my own i'd be taking the train, then the subway, then the bus...which actually isn't as convoluted as it sounds...but is rather large-knitting-project prohibitive) it suddenly came to me: i could probably finish the big smooshy stole in the time it would take to get there and back. and i was RIGHT! hooray, me!
i looooooooove the finished product: it's warm, it's cozy, it's smooshy as all get out, and it is finished just in time for those to be particularly desirable qualities.
there's just one problem... and, in fairness, when i began the project it is something i could not possibly have guessed would be the standard by which i would come to judge the quality of all knitting projects... 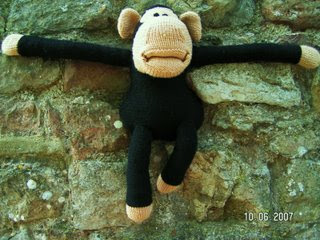