a grand day out 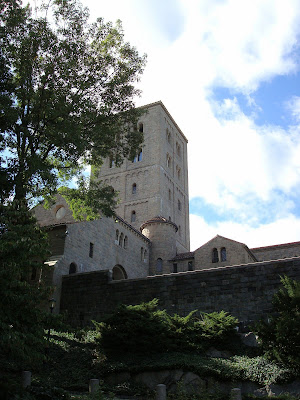 the grand entrance
the cloisters is a branch of new york's metropolitan museum of art, devoted to medieval art and architecture. it's located in fort tryon park, at the very very tippy top of manhattan, overlooking the hudson river and the jersey palisades. when you come out of the subway station--or cross the GW bridge--and look around you, it's almost impossible to believe you're only 30-minutes from midtown; surely you've been transported to another place...maybe even another time?! 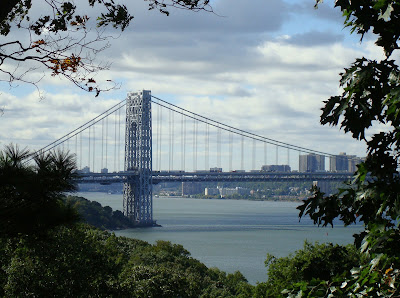 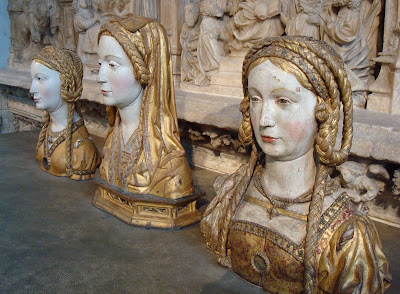 the catalog describes these as, "reliquaries of three female saints," but i like to think of them as patty, maxine and laverne
needless to say, the cloisters is quite high on the list of laureny happy places; no matter how many times i visit, it never seems to be any less magical! (having said that, LHJ is not particularly interested in medieval religious art, and yet he also loves it here; it's just that kind of place!) 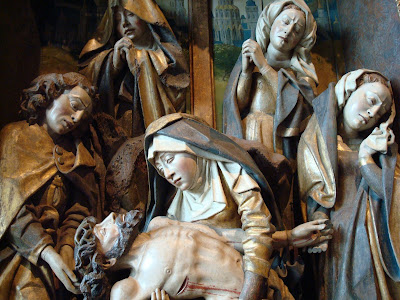 a particularly beautiful carved, painted, and gilded depiction of the lamentation

the artwork is as varied as it is magnificent: there are paintings, altarpieces, illuminated manuscripts, stone & wooden stautuary, ivories, tapestries, ceramics, gold- and silver-work, stained glass...basically, if you can think of an item available in medieval europe...the cloisters has at least one...and probably a couple! 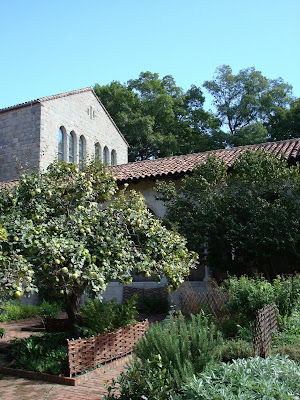 the monks' garden in bonnefort cloister (brother cadfael not included)

the site incorporates portions of five medieval french cloisters, two 12th century chapels, a monastic chapter house, and countless architectural elements. but the best part--and what makes the cloisters different from other museums--is that all of those amazing, unique, one-of-kind architectural items? the carved & massive doors, the intricate ironwork; the frescoes, doors and tombs; the altars, the stained glass windows?? they aren't just on display...they have been built right into the museum!!! it's a bit like the world's biggest, coolest, most historically accurate jigsaw puzzle! 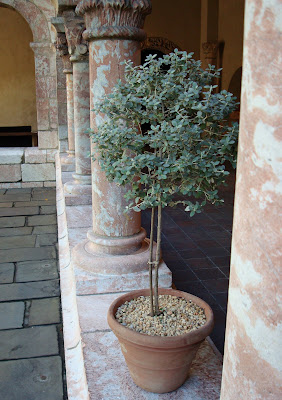 a topiary in the cuxa cloister
the eponymous cloisters are lovingly maintained and full of contemporaneous plantings; the monks' garden in bonnefort cloister features any number of edible and medicinal herbs, plus fruit trees and flowers. 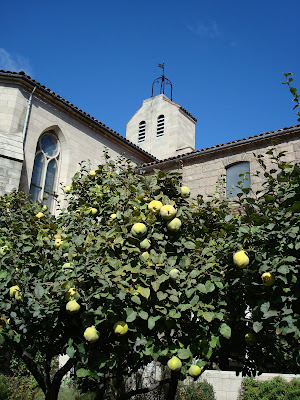 cuxa cloister's enormous stone fountain was nearly overshadowed yesterday by the last of the year's blooming lavender and mexican sage. in the trie cloister's cunningly hidden cafe you can sit surrounded by beauty & sunshine & the least-afraid-of-people birds you've ever encountered, pretending that you are a rather glamorous 12th century prioress...who has somehow stumbled upon the recipe for cappucino...several hundred years before everyone else! 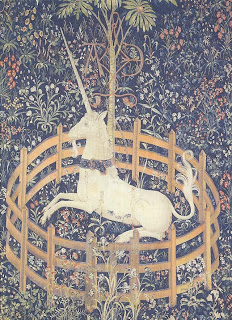 if you happened to visit on a gloriously crisp and windy autumn day, when happy little clouds were frolicking across a vivid blue sky, and the scents of rosemary and lavender drifting on every breeze, you might well feel that you had found the most wonderful spot in manhattan......and i would have a very, very difficult time arguing with you!