'member this?
it's the little art journally book thingie i made in july, inspired by clare grant's fantastic blog three beautiful things 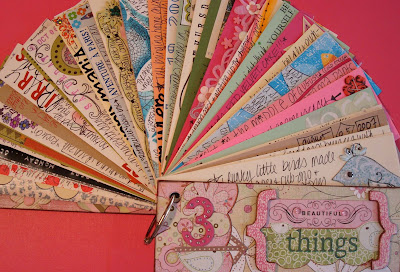 well, i am rather proud to say that, unlike the other 9,000,047 times i have started journals or diaries, this time i have kept doing it for more than two weeks! in fact, me & the little 3BT book have just celebrated our three month anniversary! since said volume has gotten rather lumpy in that time (sadly, the book is not the only one of us who is fatter since july...but i digress...) instead of just replacing its ring yet again, i have elected to retire this baby and start a second volume! 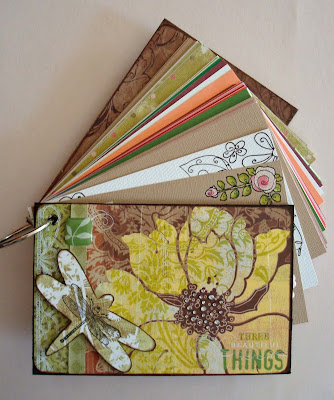 since i have been really enjoying the "art journal" aspect of it, this time i have made a slightly bigger book. this one is 4" x 6". (volume one--which began life as a 7 gypsies swatch book--was 2 1/2" x 7") i used super-thick chipboard for the covers and scraps of basic grey & all my memories papers, a chipboard dragonfly (with a stamped one on top), basic grey & ki rub-ons, a stemma epoxy sticker, we-r-memorykeepers ribbon, and of course lots of lovely rhinestones! i was having so much fun that after i finished the back of the book went on to pre-decorate a few pages; the rest are blank and just cut from scraps of cardstock. 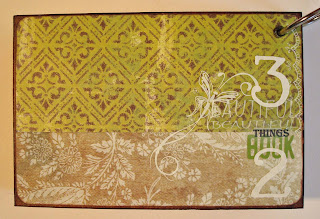 as to why this attempt at journal-keeping succeeded when all of my previous attempts did not, i'd have to say that having a specific and fairly narrow focus (in this case to merely think of three things i want to remember from each day) is--for me, at least--a very, very good idea! also, i have discovered that while i am capable of doing the 3BT part consistently, i am not equally "into" the art journalling every single day, and i've decided that's ok. some days i decorate a page, write my three, and i'm done. some days, i have more ideas so i keep decoratin'. some days i have NO ideas (or no time, or no energy) and i use one of the "pre-made" pages...or just write on a blank one and call it "good enough"!

my friend beshka said something a while ago that really stuck in my mind. she was beginning a new journal and feeling intimidated by the task, until she, and i quote "...gave myself permission to make something ugly..." and voila--the pressure was off, she started having fun, and her page reflected that. at the time, i didn't think too much about it, but a week or so later, when i was worrying over something i was about to start working on, her words came back to me, and WOW i have to say, i'm not sure why or how...but...that really works!!!

if you'd like to see another little project i cooked up recently, you could visit monkee maker's hilarious blog (what??! you don't read monkee maker? are you kidding me??! sheesh, you are missing a whoooooooole lotta fun, my friend!) anyway, today she has come out of her self-imposed blog exile (for the second time!) to write a really really nice post about some little cards i made for her. to answer a few potential questions in advance: