possibly the weirdest thing i've ever made

...and remember...
...it's *ME* saying this! :)
like many of my best and most original creations, the idea came to me whilst watching "namaste america" on the treadmill at the gym.
are ya ready?
ok...
but first: if you have never heard of shah rukh khan, the king of bollywood, the premier film star of popular indian cinema...*none* of this is gonna make any sense at all! so of course i will provide my usual wikipedia link...and a cool fan site link...and i will just mention that this entire project is a gift for my friend gill, who's the biggest bollywood film fan i know in real life (apart from myself) and who is perhaps mr. khan's biggest fan.
and now without further ado, i present: 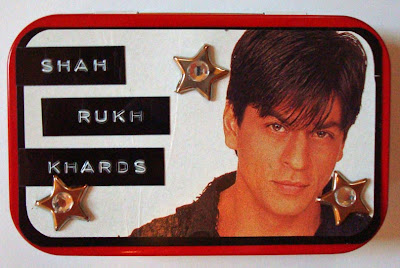 yes, as a matter of fact, that does say,
"SHAH RUKH KHARDS"
and yes, that's an altoids tin. or it was. (don't worry, i cleaned it thoroughly!)
want to see inside? 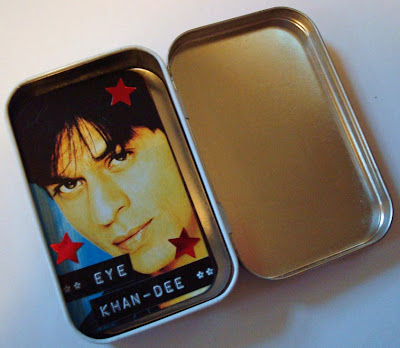 yep. pretty much what it says on the the box: a bunch of cards...with shah rukh on them.
technically, we can't call 'em ATC's, because they're not the right size...but it's the same general idea. i cut photos out of magazines, mounted them onto black glossy cardstock, and trimmed each photo to 2 x 3.25" before rounding the corners. then i added dymo labels bearing diabolical con-based puns like in-KHAN-solable and eye KHAN-tact. a little ink around the edges...a few mylar stars... 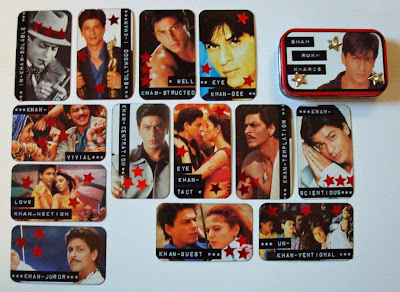 a baker's dozen of SRK mini-masterpieces...
...and a birthday gift befitting a bollywood star!!!
Posted by lauren bergold at 8:03 AM