operation 27: SO FAR SO GOOD

we're at the official halfway point of paper adventure, and here's the prompt for this week's assignment:
What has been GOOD for you so far in 2008?
What are you doing?
What is making you happy?
What is GOOD?
well not to be a brown-nose, but actually i feel like one of the best things i've done this year is paper adventure, itself! and now that we're well past the point of no return i can confess: before this i had never made so much as ONE layout about myself...and i was not altogether sure i was going to like it! but having been entranced by elise blaha's blog for about six months when i stumbled upon the announcement of her cool new project during christmas week; it seemed like it would at least be interesting if nothing else, so i decided to give it a try. (the first assignment, before we even started was, "make a minibook"...so she pretty much HAD ME right then!!!) :)
and you know, that was such a good call! i've met soooooo many cool folks this year! i've seen some AMAZING art! i've experimented with new techniques...a new format...and different ways of communicating ideas with words or pictures or both. i've thought about stuff i doubt i would have considered under any other circumstances. (and then figured out how to write down the results!!!) occasionally i have felt stumped, or overwhelmed, or (as in the last few weeks) so far behind that i might not ever catch up. ...BUT... i have never ever felt like i wanted to quit, and i don't think there's been a week gone by--even ones where i WAS quite far behind--that i didn't think to myself, "boy i am LOVING paper adventure!"
and wouldja look at my book, halfway through??!!! 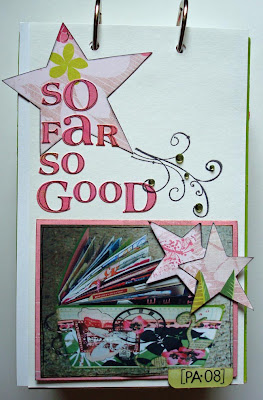 my journaling (which is similar in theme to what i've written above in this blogpost) is inside the folded card to which my half-way paper adventure journal photo is adhered:

not too shabby, eh? can you imagine how it's going to look six months from now when it's all finished?! but i definitely have to find bigger book rings. and soon.

ps: for those of you scoring at home, i am now--for the first time in a couple of months--officially & totally caught up!!!!!!!!!!!!!!!!!!!!!!!!!!! i am full of the joy of accomplishment...a feeling which will last all the way until the new assignment is posted...ummmm....ok...that's tomorrow morning, actually! (not to worry: if i *were* to ever experience the feeling of caught-up-ness for more than 24 hours i would probably OD from a lack of practice!!!) :)

Posted by lauren bergold at 7:51 AM