what do you call something that's one-sided, and too big for an envelope, but smaller than a layout?

ok, sorry, that's a bit of a trick question. i actually still call it a card, no matter what size or shape it is, and whether it has photos or collage elements or... whatever. if i make it for, and give it to you on your birthday, it's a birthday card. the end. :) in any case, they are currently calling for birthday projects of all types over at corrosive challenges; whereas opus gluei challenge #136 is to celebrate the season(s) of your choice (mine being summer!) so this, ummmmm... thing... i made for my brother works for both of those, whatever you call it: 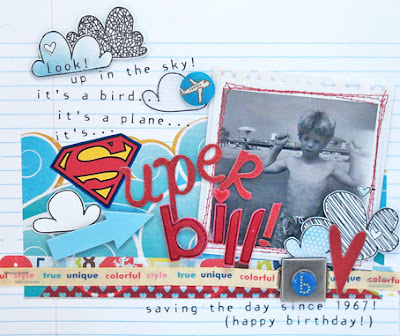 i was very inspired by laurel seabrook's awesome superhero party photo, obviously; and used almost every aspect of it, FULL ON: 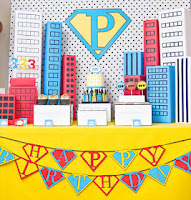 and then there was the rather fab coincidence that my mother had just happened to give me a little stack of instamatic family photos, of which this one, of my not-quite-five-year-old brother, is a big favorite: 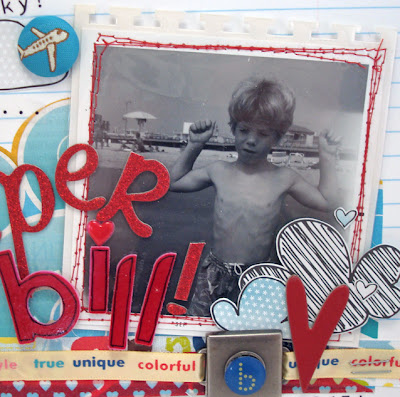 it's not technically a *GOOD* photo, i suppose. i think it must've been at the end of the roll of film, because there are some big streaky light flares down one whole side of the frame (for once, that is not my bad photo of a good photo, that's really on the print); for another my brother's eyes are shut; which is probably why my mom (who's on a big "clean out, pare down" mission) elected to discard it. i don't care, i love it! i love that he's showing us his "muscles" with such concentration; i love that you can see a little bit of wildwood, nj, c.1973 in the background; i even love the processing defects and the off-center placement that just seemed to cry out for me to embellish it! i love that when i give this to bill, my nieces will see that their daddy liked the beach as much as they do; and liked posing for silly photos as much as they do; and that despite good health and plenty of yummy nutritious food, he occasionally grew fast enough to look just a wee bit too skinny, like they sometimes do.

it's the last couple of points that matter most to me, a fact i discovered during a discussion with my husband over whether my brother would appreciate this or not. we went back and forth a bit; and i still honestly have no idea, but i finally said, "riley and lindsay will LOVE IT, though!" to which jeff immediately agreed; and i realized that's more than enough for me.

ps: i was pretty excited that miss laurel singled out my round birthday party card from last week, and also the very talented folks at merry mondays had some nice things to say about my santa baby card; but you could've knocked me over with a hexagon-shaped feather when i saw this comment (towards the end of the post) from cath edvalson about my we've been hexed card at moxie fab world!!!!!!!!!! could i possibly trouble someone to bring a ladder and get me down offa this cloud now?! ok, on second thought, maybe not quiiiiiite yet...... gimme a couple more minutes, k?! :) :) :)  (thank you ♥ thank you ♥ thank you to all concerned!!!)
Posted by lauren bergold at 5:00 AM

Email ThisBlogThis!Share to TwitterShare to FacebookShare to Pinterest
Labels: cards, inspired by challenges, papercrafting (but not cards), scrapbooking