and *now* i know why people get addicted to ATC's!!!

i mean, i had already cottoned on to the fact that they're fun to MAKE...i had only made a *couple* (plus a few inchies) until now...but really, how could a small space in which to practice free-form collage NOT be fun??!

...but...
it turns out that the reeeeeeaalllllllllllllly good part is THE SWAP!!!

(my apologies to everyone who's already immersed in this world...i realize that what i'm saying right now is the equivalent of, "i went to a chocolate shop...and all the chocolates were SO PRETTY...and they SMELLED terrific...and then i discovered that YOU CAN EAT THEM, too!!!!!!!!!!" sorry. but yeah. i am this excited!)

what happened was this: over the summer, i admired some very cool ATC's made by my lovely blogging friend amy, and she asked if i would like to participate in a swap she was arranging. then she sent me off to make ten 2.5" x 3.5" card, which i did, and they looked a bit like this: 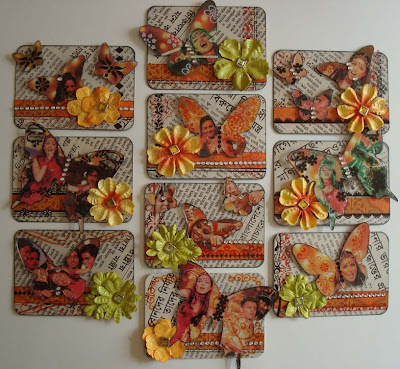 i call them "bollywood butterflies". they do not look very much like the picture that was in my head...which bothered me quite a lot when they were first completed...but they've grown on me a bit since then. in retrospect, i gather one is meant to make all of one's swap cards the same. this would certainly be quicker & even a bit easier...IF...one had enough multiples of everything used in the first card. which i didn't. so i went with a general theme, style, and type of look. (if this is a serious faux pas, amy was kind enough not to mention it!)

so i packed them up and sent 'em off and then... (probably only *I* do stuff like this) ...i sort of forgot about them! i mean, i am used to working to a deadline...and the deadlines they keep a-coming...and i sort of just got immersed in the next thing, if you know what i mean?

until last week, when my package arrived, and inside were alllllllllllllllll of these
amazing
tiny
masterpieces!!!!!!!!!!! 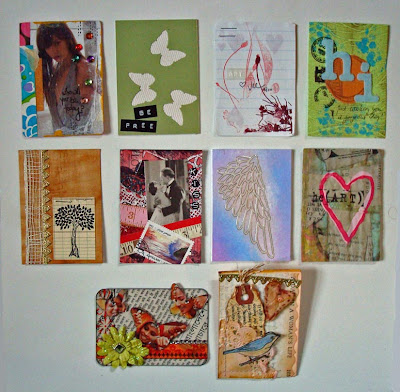 many thanks to amy for arranging said event (& inviting me!) and to all who participated; i hope you had as much fun as i did!!!

Posted by lauren bergold at 8:05 AM