this week at ♥JINGLE BELLES♥ we're still making cards which feature characters who reside at the north pole: there's missus claus, of course... (who, i think, in common with many wives of famous men, secretly does A LOT more work than she gets credit for!) ...there are all those adorable elves who actually make the christmas toys, and where would we be without the gallant reindeer to pull the sleigh on christmas eve?!

despite all of that, for the second week in a row, my card features santa, baby! 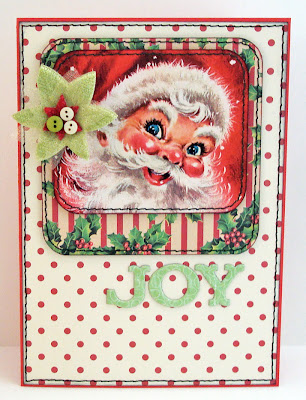 i don't know if this also happens to you, but since everyone in my general orbit knows that i am crafty, i get given a lot of "bits and bobs" which people think might "be good for something?" sometimes these items come from my own friends and relations, occasionally they are from one of their friends or relations who knows there is an artsy type in the family. obviously some donations turn out to be more useful than others, but i accept them all with genuine gratitude, because it never fails to amaze me that near strangers will think to save and pass along something they're found in their attics or their travels! i'm never happier than when the "treasure" turns out to be vintage holiday books or greeting cards, to me, it's like winning the lottery! :) the santa face above is from a big bag of vintage cards which came, some time ago, from my aunt's mother-in-law's sister, whom everyone (whether related or not) called aunt marian. she died a few years ago, but i still think of her whenever i use something as lovely and charming as this!

for the layout of my card i used this week's unscripted sketch (#169), which made short work of my labors because, as you can see, it's pretty much PERFECT, so i followed it quite faithfully: 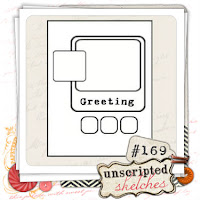 whether you choose santa himself or a member of his north pole posse; whether you have some vintage goodies or the brand new basic grey collections (or both!); whether you grab a sketch and a color palette from one of the fab challenge sites out there, or just "wing it" on your own, i hope you'll make a holiday card this week and link up with us at JINGLE BELLES!
Posted by lauren bergold at 12:01 AM