i confess that there were a few days in the past two months that i was sort of relieved that miss tammy's fabulous index card a day project was of a limited duration. never, i hasten to add, whilst i was planning or making the cards themselves; that part was pure delight; but having 61 more things to photo and post was occasionally a bit of a "mixed blessing" lol! on the other hand, the boost to my creativity, not to mention the friendliness and camaraderie of the other bloggers and folk in the flickr group more than made up for the extra time involved. ok, so here are the last couple of cards i've not yet shown: 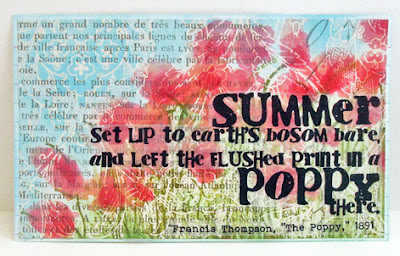 card#60: flowers
the base of this was PTI poppies stamped on "mistable" paper, before i abandoned it whilst making this card; that happens to me from time to time, i like the look of something, but it's not what i want just then, so i stow it in the "interestin' essperiments" file. i found it the other day; and then i found the perfect quote; and then i added a few more inks and called it a night. 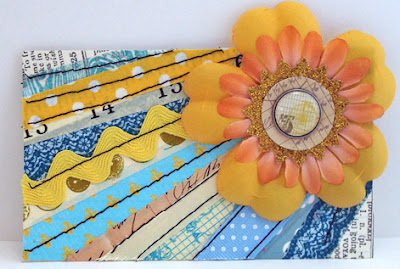 card#61: the sun
speaking of "re-takes" on an idea i already liked: here's another version of the sunburst idea from this card... and i'm willing to bet there will be more of these, in future, as well, because i can just think of soooooo many ways to do it. this one incorporates ribbon as well as deco tape; the some florals, obviously. IRL, the texture is very cool indeed!

and now would you like to see what ALL the cards look like in the official ICAD minibook? (be a sport and say yeah; it'll only take a second!) 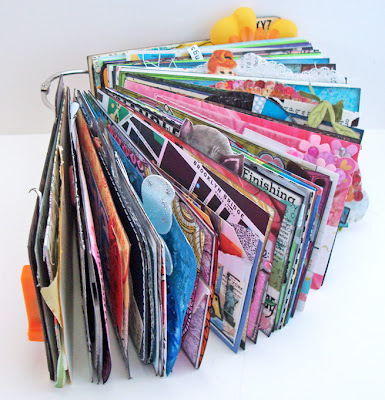 here's a shocking true confession:  see how cinderella's head sticks up off the top of the page, so you can just see her eyes? i did that ON PURPOSE! i am both proud and embarrassed to admit it, but whereas all the other "sticky-up bits" in this journal are just happenstance; in the midst of making this card, when i realized that cinderella was going to stick up no matter what, i also realized that by holding the card up to the one in front i could choose exactly where to place her, and make it look like she was checking out what's going on outside the book; so i did. and every time i see her, it makes me smile! :)

here's one last shot because i couldn't resist showing the cover again, with every single page dangling neatly from the ring in a way that makes OCD types like myself almost giddy with happiness: 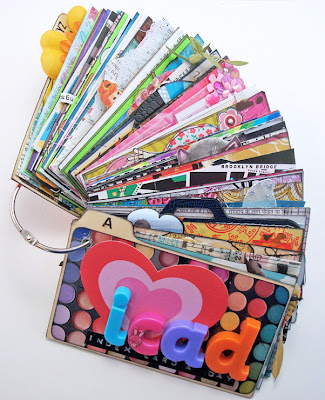 so what's up for august: daily paper prompt anyone? if you participated in ICAD, i expect you're either saying an enthusiastic, "yes, please!" ...OR... you're not reading this at all because you're already over on the daisy yellow blog, checking out today's prompt and thinking what you will do... am i right?! if you didn't ICAD, but maybe *thought* about it... why not try this now, instead? you don't HAVE TO journal every day, you know; and you don't have to post photos, if that part of it feels too weird to you*;  if you're even a little bit tempted to do it, why not try it just ONCE??! ♥♥♥ (ok, sorry, end of sermon!)

after a bit of waffling, i've elected to continue on in my previous (but recently sadly neglected) art journal, mostly because i LOVE the cover, and i quite like a lot of the work i've done in it previously: 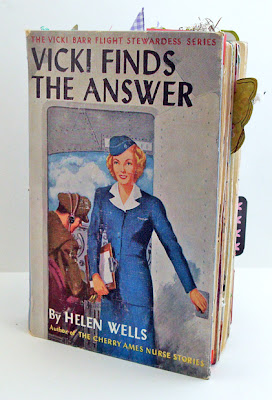 the downside is that the spine of the book is starting to crack a bit from the strain of overloading... and it's a serious P*I*T*A to photo the pages, as i suddenly recalled, whilst snapping this picture: 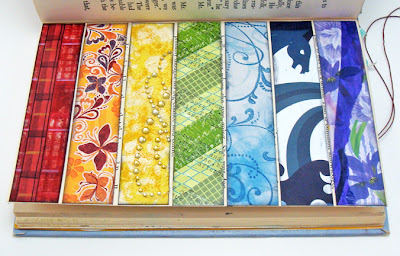 DPP1: paint a rainbow
ok, so obviously i did not JUST paint, though there is paint in there, along with ink, markers, stickers, tape, vellum, plastic, rub-ons, gems and a bit of a magazine page; so really, it's more like a collage homage to ellsworth kelly's spectrum paintings. why? becaussssssssssse... ummm... it was that kind of day, i guess! :)

tomorrow, on the other hand, is the kind of day to post a new ♥JINGLE BELLES♥ card; c'mon back and see it, won't you?

*i completely understand the concept of being either too shy or too private a person to want to share your "experimental" art. it really does feel totally different than showing off cards or other more "public" projects. i think there's a definite line, and it has to be drawn where YOU PERSONALLY FEEL COMFORTABLE! after a few years of doing this, i'm utterly fine about sharing images; but nearly always choose not to show writing of a very personal nature; though i strongly admire people who are able to do so! i will say that my experience of sharing art journal pages has been 100% positive, and the friendships and connections i have made via this side of my online art life are very precious to me! ♥♥♥
Posted by lauren bergold at 5:00 AM