that musta been some party...

...because i don't remember ANY of it!

darlings, i have a shocking confession to make: even though my parents and i spent several days at the 1964 new york world's fair, i spent most of my time either drinking or sleeping it off. yes, friends, i am not ashamed to admit that, at the time, i was... (as so many of us have been at some point in our lives) ...an infant! :)

but i was there. and, as you know, i am a person who collects (some would say, "amasses in ridiculous volume") vintage pieces of paper. mostly i stick to postcards, though i have been known to foray into souvenir booklets if they are cool enough. so occasionally, if i stumble upon something connected with the 1964 fair, and if it's being sold at a reasonable price i snap it up. (& right there you have two VERY big ifs...b/c a lot of ppl collect world's fair stuff...and the prices reflect that!) 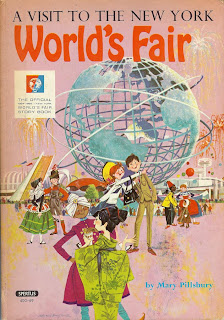 this is the favorite of my modest collection, the official world's fair story book (it says so, right on the cover! it has a little official badge & everything!) as you can see, it's called "a visit to the new york world's fair" and within it a pair of unrealistically (even by 1964 standards) wholesome and doe-eyed children take in the attractions of the festival. i got it at a garage sale. i think i paid twenty-five cents. ok, it might've been *fifty* cents. but it was worth splurging on, because it turned out to be a "two-fer"...look what was inside: 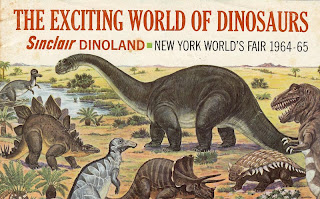 yep, a souvenir booklet from one of the exhibits! sinclair oil's, "dinoland" was apparently quite a draw, what with the massive animatronic beasties that move and roar and everything! (remember, at this point, disneyland is less than a decade old...and disneyWORLD is almost a decade away) the booklet is quite charming with very detailed illustrations of each of the dinos displayed, a bit of text describing them, and a subtle plug for sinclair oil at the end. 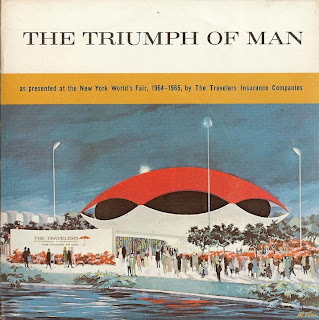 the other day my mom gave me this, which she found in a box in her basement. its's a little fold out booklet describing "the triumph of man" display sponsored by the travelers insurance company. it's got photos of each of the thirteen dioramas (diorami? dioramae?) and a bit about how each was selected as being pivotal. it's also got a red vinyl 45-record which apparently contains the complete narration and music from the display. thanks, mom!

Posted by lauren bergold at 8:53 AM