operation 09: TAKE IT OR LEAVE IT 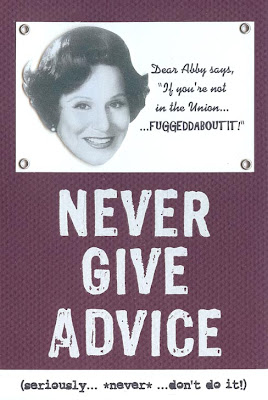 (a note to the non-american and/or non-my-age reader: abigail van buren was a newspaper advice lady--the brits would call her an "agony aunt"--for years and years, starting in the 1950's or 60's. "Dear Abby", as she was known, became the standard and almost a kind of brand name, not only for that sort of newspaper column, but almost for advice-giving, generally. if someone had a moral or social dilemma, or just something about which they could not make a decision, their friends might well tell them (either seriously or in sarcasm) they had better "write to dear abby". conversely, someone butting in with unwanted opinions or instructions might well be asked with some outrage, "whodoooya think you ARE, dear abby??!" bascially, she was a nice, middle-class, middle-aged, sensible woman who provided a voice of reason and friendly helpfulness to millions. certainly she would *never* say, "FUGGEDDABOUTIT" in a kind of pauly-walnuts-from-the-sopranos voice as i have made her do above, in a way which lovely husband jeff does not find AT ALL funny, even though it has cracked me up for the entire weekend! and yes, that is really her photo, circa 1970.)

this is in the nature of a "note to self". it's intended to remind me not to give in to the frequent temptation i feel to give people advice. because in my experience...it never works...unless by "works" you mean, "effectively ends the situation with everyone involved being angry at me"! (and i sooooo don't need any help with THAT, thanks!) :)
Posted by lauren bergold at 7:21 AM