sticks and stones may break my bones...

but andy goldsworthy would turn them into art!

the sticks and stones, i mean. he would probably not use my bones. but i could be wrong, because in addition to rocks and wood, he's also been known to create sculpture (it's the wrong word, really, but it's as close as traditional art terminology comes to what AG does) from leaves, wool, dandelions, reeds, moss, snowballs, and icicles!

i was going to link you to sites which feature goldsworthian work...but the fact is...pictures just don't capture it. because it's all so ephemeral and unique. photos can record it, but they aren't enough. nope, to really "get it" you need to see this: 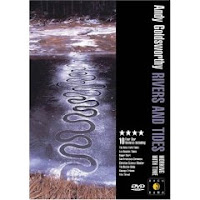 it's the absolutely hypnotic documentary rivers and tides in which a film crew followed andy goldsworthy for an extended period of time (a year, i think) and recorded him talking a bit about his life and work...but mostly...they just stood back and let him make art. which is brilliant. because as interesting as he is when he's speaking, he's twice as eloquent with bits of shale, or ice, or ironstone ground into powder.

i mention this because said film came on television the other night, and even though i was on my way to an early night AND i have seen it 57 times AND actually own it on dvd...i still sat down to "watch five minutes", got hooked (like always), and watched the entire film. again. i could try to explain why this happens...and how i'm not the only one to whom it does happen...but i know i would fail miserably at such a task, so i will just say: film good, you watch! yeah, i think that sums up my stance rather well. :)

while we're talking about art documentaries, i might as well mention who gets to call it art and how to draw a bunny. both of those are more traditional "talking heads" documentaries (a la pbs' american masters program) , but well worth a few hours of your time, if you like that sorta thing. (i do like that sorta thing...quite a lot...as well we know!) the former is a profile of henry geldzhaler, the metropolitan museum's first curator of "contemporary art" and features contemporaneous interviews with pretty much anyone who was...or is...anyone on the new york gallery scene from 1960 on; the latter is a slightly more offbeat look at the career of the vastly overlooked ray johnson, whose greatest "work" might well be considered to be his life...and death...

speaking of pbs, art:21 has apparently been around for a bit, but somehow i am only just discovering it now. it's got sort of a magazine format, and each episode features 3 or 4 "up-and-coming" artists, from all disciplines. if i ever manage to reliably figure out when it's on...in advance... (so far i have only caught bits & pieces; some of which were repeats) ...i'll let you know!

Posted by lauren bergold at 9:39 AM

Email ThisBlogThis!Share to TwitterShare to FacebookShare to Pinterest
Labels: movies/tv