...CHRISTMAS CARDS!!!
believe it or not, this is the one kind of card i generally don't make, because i am not particularly into mass producing operations; plus there are usually so many "giftie" things to make at this time of year, i'd just as soon concentrate on those.

however, this idea is stolen from (AHEM) ...is in tribute to... (that's better!) my mother-in-law, who rather brilliantly invented the semi-home-made christmas card last year. she took a box of store-bought "photo frame" cards, but instead of filling them with photos, she made little collages cut from pretty christmas cards she had saved over the years. is that *FABULOUS* or what?! you skip all the dull engineering bits: cutting and scoring and folding and trimming to create the boring old card-base......and go straight to THE FUN PART: decorating and embellishing!!! i was lucky enough to stumble upon these very pretty frame cards after xmas last year. they were on sale. very very much on sale. so on sale, the store practically paid me to buy them! niiiiiiiiiiiiiiiiiiice.

btw, since these all have bits on them that i trimmed out of old cards and/or books, i'm submitting them to the daring cardmakers' challenge, which this week is to feature hand-cut elements on your card! 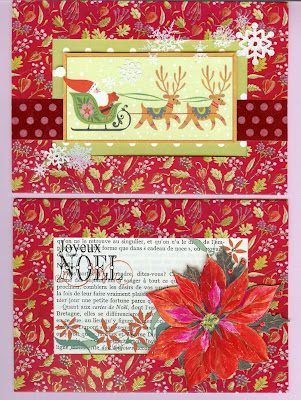 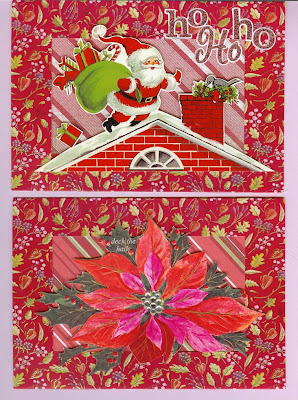