...and now for something COMPLETELY different...

so different, in fact, that i'm not entirely sure what it *IS*! see, it all started with a castle. this castle: 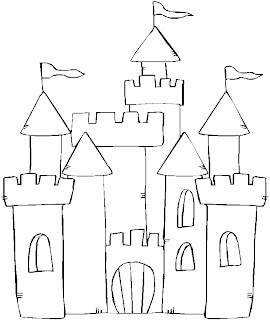 cute, right? it's actually a dingbat from a font called "db once upon a time". i got it specially at scrap-n-fonts because i wanted to paper-piece it on niece lindsay's birthday* card. and it came out reallllllllllly well, if i do say so myself. but then i thought, "should this be for the card, or should i put it on a giftbag, and make a coordinating card?"

i was inclining to the latter, so i thought it'd be cool to use some of the other images from the same font to make a paper-pieced rebus-style card. but there were soooooo many cute little pictures, that i got carried away; and there's no way i could paper-piece something so fiddly. instead, i colored it in, using adobe photoshop. and it came out pretty well, if i do say so myself. 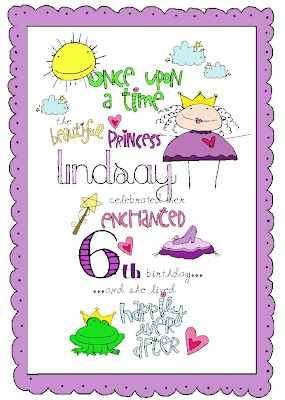 then the question was: what do i do with it? printed, it's nearly 8.5 x 11". which is a bit big for a card...even one of MY cards...though i could re-size it slightly smaller. but it doesn't totally match the finished paper-pieced castle, and it's not really as fancy as certain nieces are accustomed to having their cards be. there are no rhinestones or jewels or sparkly bits, for example. clearly, this is NOT a card. maybe it should be the inside panel of a (fancier, bling-encrusted) card made to coordinate with the castle? ...OR...maybe the castle SHOULD be the card, afterall; and a slightly shrunken digi-masterpiece can be the centerpiece of the giftbag? i'm still mulling it over, but i kind of think that's the way to go.

one thing i'm sure of: the beautiful princess lindsay WILL have an enchanted birthday...and she WILL live happily ever after! ♥♥♥

Posted by lauren bergold at 7:17 AM