i know what you're thinking: no paper adventure pages for *ages* and then TWO come along in the same week! yepper, i've finished another one. this one's called "five years" and in actual fact we were meant to say where we thought we'd be five years from now. as i was thinking about that, i was also editing pics from a recent playdate with my nieces and nephew, and it occurred to me that five years ago, the eldest, riley, was just a year old, and the rest weren't even a glimmer in anyone's eye. it also occurred to me that five years from now, riley will be *eleven* and young matthew (whose first birthday is not until september) will be SIX! the more i thought about it, the more i realized that absolutely EVERYTHING about all four kids--except their names--is going to change completely in the next five years...probably more than once! i can't imagine what they'll be into by then, but i don't want to forget the little things that are true right now, so i chose a photo i especially liked from that day and started making a few notes. i wound up making a fold-out page so i could fit it all in. 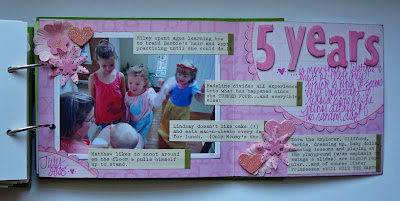 "5 YEARS...is more than a lifetime to most of these guys! which is why it seems very important to record some of the small details of this random summer day. july 2008"

"riley spent ages learning how to braid barbie's hair. she kept practicing & practicing until she could do it."

"matthew likes to scoot around on the floor now, and has started to pull himself up to stand holding on to something"

"madeline divides all experience into things that have happened since she turned four...and EVERYTHING ELSE!"

"lindsay does not like cake (!) and eats mac-n-cheese every single day for lunch. (it has to be mommy's speical homemade kind!)

"dora the explorer, clifford, barbie, dressing up, baby dolls, dancing lessons and playing at the playground (w/an emphasis on swings & slides) are highly popular. and of course the disney princesses still RULE THE EARTH!!"

Posted by lauren bergold at 7:44 AM