...OR... step-by-step instructions on how to inadvertently make a hilarious card-based oxymoron!

my friend trish loves minimalism, clean lines, bright clear colors, and a generally crisp and modern graphic look. so every year i try to make her a birthday card which reflects that. and every year i fail...because i'm...well... *ME*! but occasionally i really do get QUITE CLOSE. 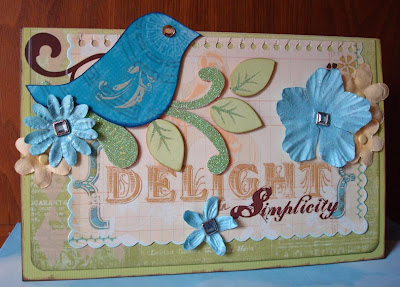 (cardstock: bazzill; patterned paper: iron orchid, frances meyer; journaling card & brads: making memories; rub-ons: my mind's eye, fancy pants; clear stickers: heidi swapp; flowers: prima, making memories; diecuts: k&co other: colorbox inks, stickles, foam tape)
i started out with *SUCH* good intentions: acid green cardstock base, bright blue bird, primrose paper flowers, sweet little leaves. so far, verrrrrrrrrry trish; yippee! then i decided the bird needed a branch, and the first one i found that was a good size had sparkles on. wellllllllllllllll...surely a FEW sparkles couldn't hurt?? nahhhhhh, they'll be fine. plus, it's TOTALLY the right color and shape! then i decided to try out the "delight" rub-on the lady at the scrapbook store gave me. i set it on the diecut journalling card, and could see right away that we were going in SO the wrong direction for a trish card & decided to change it...but then...i realized the rub-on had started to stick ON ITS OWN! consternation! uproar!!! (note to self: NEVER take them off their backing on a humid day!) ok, well, we're commited now. fine. so we're going to be needing a bit more blue then. AHA! leftover sparkly blooms* from another project. well, they certainly put the glittery branch into context, now don't they? since "delight" got stuck slightly higher up than i might've liked (arrrgh!) i decide it should now say "delight IN...something" . but what? i spot the partially used pack of rub-ons from my CAARDVARKS "closet" card, which has a script, "simplicity". it's EXACTLY the right size and shape. it's EXACTLY the wrong style and font. oh yeah, and it's dark brown, which nothing else on the card is. i ink the edges of the green cardstock dark brown, but it's not really enough. ah well, we're kind of layered and shabby chic now anyway, might as well go for broke!!! i add an apron of softly patterned green paper between the two existing layers, throw on a couple of tone-on-tone clear stickers, and finish off with more of the brown rubs... et voila!

*they're really just regular primas that i painted with a thin coat of clear stickles glitter glue
Posted by lauren bergold at 7:52 AM