my dreams are always strange & convoluted

in the one i was having just before i woke up this morning, i was driving south on 287 just where it joins 202 near somerville, new jersey... 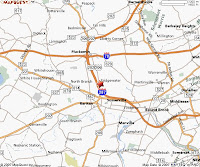 ...when suddenly the dream shifted and without explanation i was, instead, in a concrete stairwell, along with my aunt judie (known in our family as "AJ") and halle berry...who for some reason was trying to kill aj*...who was trying to order a martini.**

being a loyal and devoted niece, i did my best to stay between halle and aj, so that no harm could befall the latter. halle and i would run up the stairs to where aj was and somehow, behind me, aj would manage to get downstairs. halle and i would run back downstairs, only to notice that aj was above us, peering over the railing and helpfully shouting over and over, "run carefully! run carefully!" to me. at some point it occurred to me that this didn't really make sense... (surely we should occasionally be catching up to, or at least passing in front of, said relative?) ...and i experienced what is, for me, a familiar dream phenomenon--that of my conscious and unconscious mind having a discussion about the plausibility of the action; like two moviegoers in a multi-plex:

the color lime green could not be reached for comment

as is generally the case, once my critical thinking skills kicked in, it wasn't long before i awoke. not only am i clueless as to the deep symbolic meaning of the dream, i still have no idea where the car went, how i got into the stairwell, or what halle's beef with aj was. all i can say is...if at any time today, in the course of running your saturday errands, you happen to find yourself in a stairwell with a starlet...*don't* order a martini! ...just in case...

*this was abundantly clear even though halle did not, at any time in the dream, brandish a weapon. thus i can only assume she had a video i-pod loaded with "catwoman" tucked in a pocket. yeah. that'd do it.

**a drink i have never known aj to drink and certainly will do my best to prevent her from consuming in future.

Posted by lauren bergold at 8:22 AM