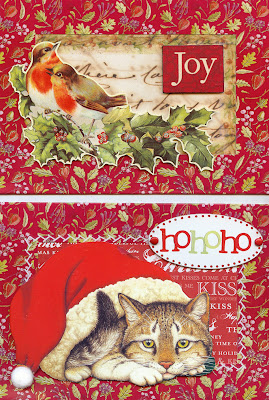 (k&co and dcwv patterned paper; making memories & doodlebug cardstock stickers; provocraft and k&co rub-ons; queen & co brads; plus: pom-pom, foam tape, glitter glue; the fact of the last two cards being a cat AND some sweet little birds did not strike me until i came to scan the cards in question. not only is it a nice--if unintentional--visual joke...it's an apt metaphor for ME and xmas at this point in time. hint: in this scenario, i am the birds!)

the joy and the rapture of completing these babies lasted right up until last night, when, having done 90% of the writing and the labelling...i realized...i still need a few more. which will need to be made from scratch. it's a good thing i don't have the time or energy to panic, because between that and the fact that i took stock of the gifts i have already aquired...vis a vis the amount needed...in conjunction with the fact that christmas is two weeks from YESTERDAY...and yes, i am still fightin' my frickin' back at every turn...

well, let's just say A LOT of people will be getting money or giftcards this year...some of which may not arrive until early january (is it too late to convert to eastern orthodox??!) and/or be presented in [GASP!] store-bought cards.

but as cathy zielske so brilliantly said:

right on, sister! if i had the time, i'd embroider that on a cushion!

Posted by lauren bergold at 9:10 AM