i dunno about you, but i *LOVE* holiday-themed entertainment. i love christmas music, christmas movies, and the animated christmas shows from when we were kids. i even love the "special episodes" that regular tv programs have...including programs that probably shouldn't have them...like bones! (because christmas & forensic anthropology go together like...well, like two things that really, REALLY don't go together at all...o'course, having said that, i loved the repeat which aired last week AND this year's holiday episode from two weeks ago.)
so i thought it would be fun to make a top ten list of my faves. but then, of course, i couldn't quite narrow it down to ten, so i added a couple extras.
before i begin, let's address something that is bound to come up: no, it's a wonderful life is not on my list. nor is a christmas story. the reason? i don't really care for either of those. i realize it is practically HERESY to say so! i know they are the two most popular christmas movies of all time, and i respect that. i'm not saying they aren't high quality, well-made films. i just don't particularly like 'em. whilst i'm embarking on holiday confessions i might as well also tell you straight out: i *hate* eggnog. (there, i've said it.) yes, as a matter of fact, i AM weird. thank you for pointing that out! (anyone to whom that thought is only now occurring for the first time, i implore you: seek help!)
but here now the list, in no particular order: 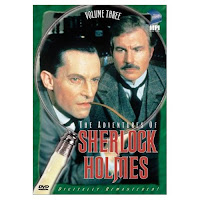 sherlock holmes: the blue carbuncle
from the first series of jeremy brett's tenure, complete with the original watson, david burke. it sticks almost perfectly faithfully to the conan-doyle story...which doesn't *entirely* make sense if you think about it too hard...but to me it's the ultimate christmas-themed mystery.

comfort and joy
the magnificent bill paterson is a scottish dj who gets dumped by the love of his life a week before christmas. so of course then...as often happens in these situations...he becomes embroiled in a turf war between rival ice cream vendors! bill forsyth, writer/director of gregory's girl and local hero is absolutely on form here, and yet somehow, nobody knows about this film. pity.
rudolph the red-nosed reindeer
the first--and arguably best--of the great rankin/bass stop-motion animation classics. rudolph and i are precisely the same age, having both made our xmas debuts in 1964. (of course there was considerable "pre-production work" involved for each of us!)
a charlie brown christmas
you know it and you love it...or not...but either way, there is nothing i can add except, "merry christmas, charlie brown!!!" 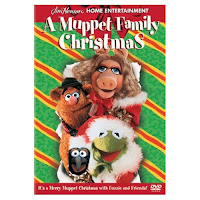 muppet family christmas
imdb says this is from 1989, and i believe them, but i have no memory of ever having seen it aired (before or since) except for one december afternoon, sick in bed, about ten years ago, when it was on cable. it's got all your favorite "muppet-show" muppets, plus the characters from sesame street, and cameo appearances by fraggles, muppet babies, and jim henson. they sing, they dance, they tell jokes (wocka-wocka-wocka!) if you like muppets, you'll enjoy it; if you don't like muppets, i doubt this will convert you.
white christmas
this was my father's all-time favorite film. and being as he was not really a "film guy", that fact totally stands out in my mind. when i was little, he'd scan the tv guide eagerly starting in late november to see when it would be on. even after the advent of vhs, he still did this. he never wanted or needed to own the movie. he preferred to watch it when it was on television, even if that meant sitting through commercials. of course i was an adult before i really "got" the story. it's the typical 1940's/50's style musical, really, with the advantages of being in glorious technicolor, having an amazing all-star cast, and sporting a score by irving berlin.
scrooge aka a christmas carol
this is the 1951 version with alastair sim. of course there are LOTS of versions of this, many are excellent in one way or another, a few are truly appalling (there was a tv adaptation in the 80's, at the height of susan-lucci-mania of which i am still having flashbacks. yikes!) but to my mind, this one is probably the best. for me, it just works, perfectly, in all respects.
how the grinch stole christmas
some versions of the vhs and dvd have a "making of" special which is truly wonderful. i mean, think about it: chuck jones had the extraordinary vision to choose a children's book which takes *maybe* 10 minutes to read aloud at the very most, and by virtue of adding songs and stretching the action, manages to fill 26 minutes without harming or even "messing with" dr. seuss' original material. genius.
scrooged
even before he met wes anderson, bill murray could take a film, and by sheer force of his own comedic will, make it good. granted, this baby feels just a teensy bit dated...and it co-stars bobcat goldthwaite for pete's sake!...and yet, i love it anyway, every time.
doctor who: the unquiet dead
since the re-consitution of doctor who there have been *several* wonderful christmas episodes, but this is my favorite. it's set in cardiff, in 1869, with simon callow as charles dickens ,and an appropriately spooky, ghost-filled plot. what else do you need??! (hint: nothing!)
blackadder's christmas carol
in this version, rowan atkinson is a victorian incarnation of blackadder who's friendly, unselfish, caring, giving, and kind. thank goodness the spirit of christmasses past & future (as embodied by robbie coltrane) arrives to fix all that! 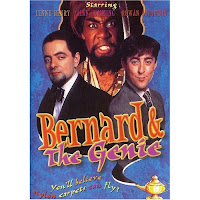 so what do you like to watch around the holidays?! (tracy, being a trendsetter, has already posted her list over t'weekend!) c'mon...i know there's something to which you know all the words, sing all the songs, and just generally feel "it wouldn't be christmas (or hannukah, or kwanzaa or yule) without............"! SPILL! !!
Posted by lauren bergold at 9:02 AM