lately, art-wise, i've been doing a lot more essperimenting than completing stuff. the combination of some free time, a considerable backlog of "art play" ideas, and the new art journal has been a real tonic to me! blog-wise, i'm pretty sure this means you'll be subjected to more ramblings like this where you don't get to see a completed project, just lots of half-formed ideas and funky weird stuff; but that's what i've got right now, so that's what i'm goin' with. having said that, if you decide to skip this post and head right to the lolcats today...i totally understand!

my favorite thing about watercolors is how the color is floaty, and uneven, and so beautifully has a mind of its own! coincidentally, this is also my LEAST favorite thing about watercolors. (it sort of depends on the day!) i am (slowly, sloooooowly) starting to get an idea of how to make things lighter or darker and how to keep the colors separate or make them more blendy. sort of. a bit. at the same time i am embracing their funky unpredictable nature! (this is BY FAR the easier of the two!)

here's a little scene i painted, it started out just on the envelope... (which was from my credit card statement; but i decided it'd make a nice pocket for some longer journaling*) ...and then i decorated the card inside...and finally i decided to do the page before i attached the rest. there's some hand stamping here, as well, and some verrrrrrrry old glitter-rub ons that adhered imperfectly, and some doodling. the text on the pull-out card reads, "why is hidden journaling *SO* irresistible? because it's HIDDEN...duh..." 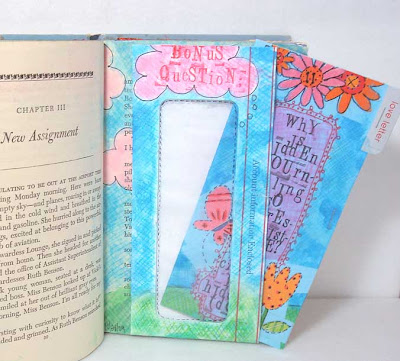 here's something i've always wanted to try...extending an existing scene into my own page. in this case it's a magazine photo of a sailboat. i was playing with the cuttlebug's mosiac embossing folder and it made this neat tiled effect...then i tore around the edges to make it like an old ruined fresco...then i glued it down and painted around it. at the end i used a white uniball pen to make the horizon and the white line in the foreground (where the photo stopped & the advertising began in the mag) and then at the very end i wasn't sure if it was done or not, so i outlined everything in black...which, in retrospect, i don't really like very much. but that's how these journal escapades go...i don't PLAN them...in fact i try consciously NOT TO plan, just to let them evolve. because in the end the playing part matters much more to me than the finished page. 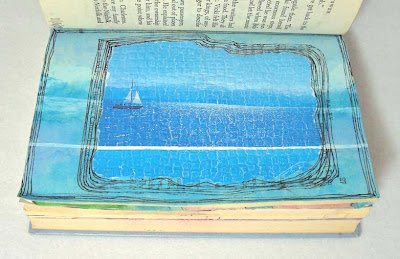 this next one isn't actually in the journal--at some point i think i will probably make a card out of this, which is why i haven't glued it into my book. i tried out the cool "seashells collage" folder that stef sent me on a piece of core'dinations' whitewashed cardstock . i embossed the image, then ripped around the edges, sanded the raised bit of the image, and did a little bit of inking here and there. and it looked gooooooood...but i still thought it needed SOMETHING...so i got out the watercolors and started dabbing 3 or 4 shades of blue and purple around randomly. i put some on...and wiped it off...mixed the colors up...added a bit...take some more off... until, at the end, i was really happy with it. 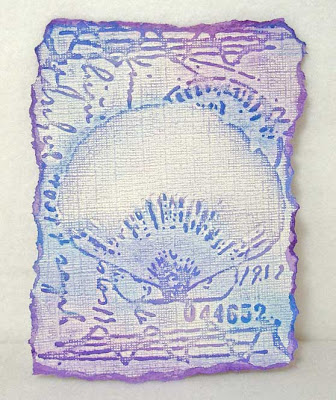 this next one is the weirdest, and thus my favorite. :) i have a SERIOUS art crush on dina wakley and am MASSIVELY inspired by her fabulous, free, colorful style; this page is my art brain "on dina"! i cut hearts out of scrap-paper and stuck them down with removable adhesive. i watercolored big outward halos of pinks and reds, then removed the masks and painted inside them with a mixture of gesso & acryllic paint. i stamped with bubblewrap and an empty paper towel roll in dark red, then i stamped with a music stamp in a flourish in shades of pink, and finished by randomly flicking the watercolor brush at the page. somehow the bubblewrap pattern looked like rosebuds to me, so i added some pen doodles, and wrote my journaling, and at the very end i did a little handstitching. 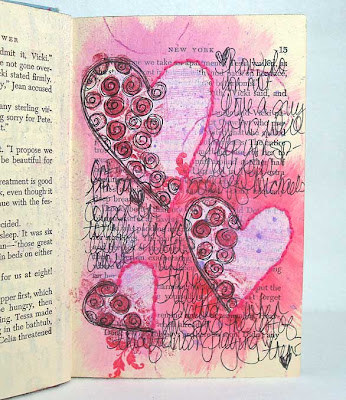 *side note about hidden journaling: you know how art journal people are always saying that they use their journals to express & work out all their negative thoughts & feelings? well, i was pretty dubious on this point, for myself--i thought, if anything, it'd make whatever negative things i expressed even more concrete and i'd be stuck with them forever! but on this particular day i was VERY hurt and angry indeed, and decided to give it a go. i wrote down all of the mean, nasty, unkind, ugly things i was thinking...and then...i stapled the card shut and started decorating and embellishing and doodling and...well, i bet i spent an hour from start to finish. and at the end of it...i'll be darned...i seriously did feel MUCH BETTER. now, when i look at this page, i can remember what i wrote and why...but i don't really FEEL it in the same upsetting way, because somehow the ART part outweighs the JOURNALING part. interesting, no?
Posted by lauren bergold at 7:22 AM

Email ThisBlogThis!Share to TwitterShare to FacebookShare to Pinterest
Labels: art journal, papercrafting (but not cards)