i went a little kerrrrrr-AAAAAY-zee!

(i know, i know--*SO* unlike me!)
you know what those physic dudes say: "for every action there is an equal and opposite reaction." yesterday i showed you a card that was calm, restrained, and full of restful white space. this one isn't ANY of those things, which is quite hilarious when you consider that i made it using scraps from the other one.
but i've got ahead of myself. first the sketch: 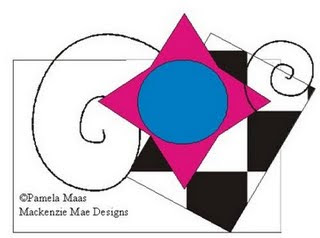 it's this past week's super sketchy sunday (day 260) from 365 cards, and i LOVE IT. i'll be using this again for sure. though perhaps not quite as...ahem..."exuberantly" as this: 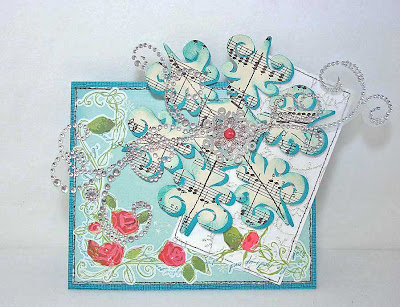 (patterned paper: paper co, dcwv, vintage sheet music; cardstock: core'dinations & staples; frosted acrylic: shortcuts; rub-ons & gem flourishes: prima; diecut snowflake & brad: making memories; ink: colorbox & bazzill; adhesives: tombow mono runner, gluedots, 3m foam tape; other: sewing machine, edge distresser, basic grey chipboard snowflake used as a template)
i have to say this was one of the most fun cards in the world to make! i'd pre-cut the snowflakes earlier in the week (more on that in a minute) and i had the scraps from the layered tree card sitting next to me. the prima rub-ons were brand new... (someday SOMETHING made by prima will stay intact for more than a day in my house!) ...and i knew immediately i wanted the outflung flourishy bits from the sketch to be crystals.
it took me a few minutes to figure out how i could *support* the crystals if they were going to flourish themselves right off the card base, but as soon as i found a leftover sheet of shortcuts' frosted acrylic, i was good to go. i affixed the gems to the snowflake, starting in the center, and then when i got out to the edge i placed a larger-than-necessary bit of acrylic under the snowflake to catch the "overhanging" ones. i anchored the acrylic securely to the back of the flakewith gluedots, and then trimmed carefully around each flourish. et voila! 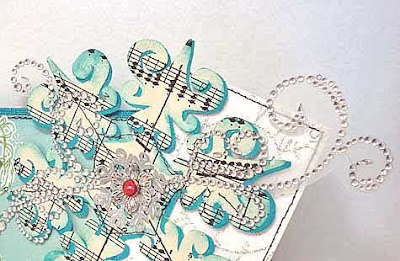 finally, two words about said gorgeous snowflake: NEVER AGAIN. i traced a basic grey chipboard ornament that i absolutely adore, and i LOVE the result, but cutting this baby out was a B*TCH and a half. you know me, my middle name is "fussycutting" but yeeeeeeowza! all those little curls and curves and reverses which make it look so lovely and so intricate were waaaay too much on the old carpals. i cut three layers of this at once...and two of 'em are on this card. the third will show up at some point and then i will...regretfully...go back to ordinary store-bought flakes!
Posted by lauren bergold at 10:37 AM