if these words look like nonsense to you, get an IMMEDIATE eye exam!


obviously. these words ARE nonsense. but why have i filled one transparency with nonsense words and another with splodges of paint?

well, you see, it was this way: i made a collage as the base of a birthday card for my friend paul, who's an amazing painter!* (ok, this thing is 12 x 12" and one-sided...i am using the term "birthday card" a bit elastically) anyway, i really liked how it came out. 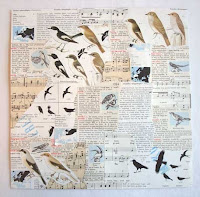 but i also wanted to include my favorite barnett newman quote** about aesthetics***, and thus needed to fit the words on. and i wasn't sure they'd still show up on the busy backgound. and i knew i didn't have time to start over if they didn't. so i stuck some "junk letters"on a transparency... (ok, a lot of them, technically speaking, are *NUMERALS*; but they're the approximate size & shape of the letters i'd be using--which essplains the nonsense words!) ...and placed it over said collage. 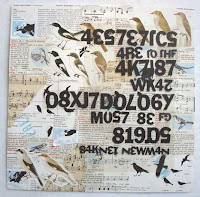 and i was soooooo right, wasn't i? they really don't stand out enough. so then i thought, i'll slop a bit of paint over the parts of collage which are right under the words, so they'll be more visible. but what color of paint would i use? and how sloppy should it be? and which bits exactly needed to be covered? 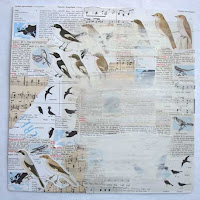 so i tried out some color/style swatches out on another transparency...and then i went back and forth between the two until i knew what effect i wanted... 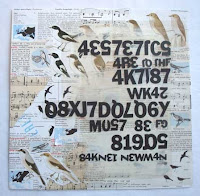 and finally, when i had made all my "mistakes" and figured out how to correct them, i actually put the paint, and then the text, on the collage.

if you think this whole rigamarole sounds insane...well YEAH! but who else do ya know that's gonna be both daring (assaying several untried techniques on the same project!) and over-cautious (trying them "safely" before committing!) at the same time??! see, right there is EVERYTHING YOU NEED TO KNOW about me!!! :)

in the end, it was worth the fuss, because i ♥LOVE♥ the way this turned out, and it's a really good example of what i meant when i said i'm always "chasing" a mental picture i can sort of only see out of the corner of my eye: this baby probably comes as close as i've ever been to reproducing what was in my head! (dontcha LOVE IT when that happens?!) 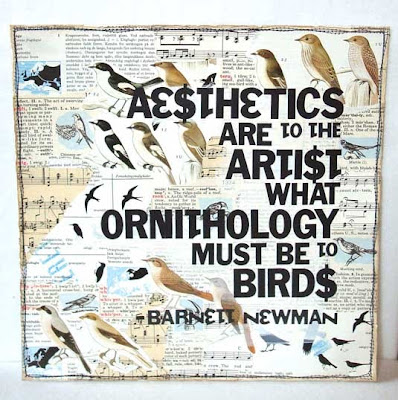 (materials & misc. details: vintage dictionaries and a german bird book; scraps of vintage sheet music; elderly vinyl letter stickers from staples ("liberated" from work--hence the lack of S's T's & N's...i like the improvised letters however!); several coats of folk art metallic pearl white paint (mixed with a few drops of liquitex white gesso); colorbox creamy brown chalk ink; i machine-stitched rather wonkily around the edges several times and then inked and distressed them. my only regret is in justifting the quote to the right instead of the left...i like the look, BUT...the birds are almost all facing the other way, and they'd've been interacting with the text more on the other side. but i'm nit-picking...only b/c i am otherwise quite obnoxiously happy with this!)


*if you're thinking, "hey wait! what happened to the notebook paper collage?" wellllllllllllll... as much as i looooooooove that thing...it was totally wrong for this. so i'm usin' it for something else (which i'll show ya when it's done) and i started over for paul.


**if you like modern art i recommend the fascinating and informative film who gets to call it art? if you DON'T like modern or abstract art...i recommend it TWICE AS MUCH, actually! :)
***aesthetics being the branch of philosophy dedicated to the critical interpretation and cultural significance of art.
Posted by lauren bergold at 7:28 AM

Email ThisBlogThis!Share to TwitterShare to FacebookShare to Pinterest
Labels: cards, collage, papercrafting (but not cards)