the other day june asked me how i conceal the adhesive inside clear cards, and as i was getting ready to email her back, i realized that this might make a good blog post. (ok, ok, what i actually realized was i didn't HAVE a blog post, but with some judicious padding and a few pics i could make this into one. so i did. sometimes it's THAT SCIENTIFIC, folks.) :)

before we get started, i need a favor, please: i need you to pretend that these photos are somewhere near consistent in lighting. or at least not embarrassingly bad and awful. yes, i know they ARE embarrassingly bad and awful--in fact i've bumped the contrast up in some of 'em to make the adhesives as visible as possible; but since they're only for illustrative purposes, work with me, ok? thanks.

right, so the question was, "how do i conceal the adhesive inside clear cards?" and the short answer is, i don't. or at least not completely. anticipating the follow up question, "doesn't that bother you?" nope. i don't really worry about it, and here's why: most "civillians" (aka--non craftees) just do not look closely enough to notice! seriously. trust me. trust me!

having said that, i do try to minimize the appearance as much as possible. which is one of the reasons i prefer printed transparencies to plain for card bases...adhesive is a lot less noticeable when there's something else going on. case in point, my 2S4Y sketch card from this weekend. would you like to see the back? 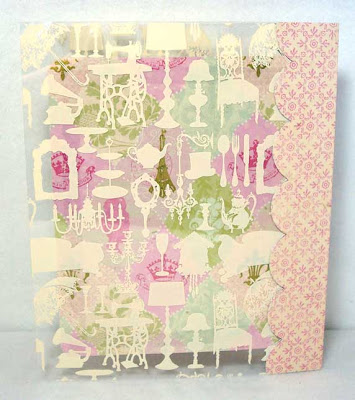 can you see the adhesive?? cause all i've done is tombow around the edges, as neatly and as straight as possible. g'head, click the photo bigger if you want. irl, it's visible...but it's pretty faint. and it's done quite neatly. and it's the back of the card.
wanna see the inside? here ya go: 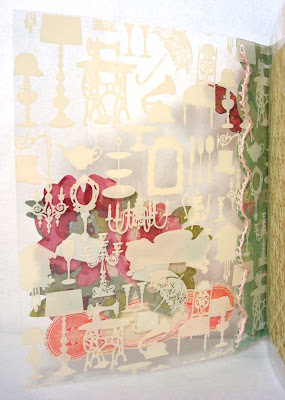 this time, i've used rectangular pieces of foam tape on the flowers and the journaling card. it's 100% visible. but it's placed among rectangular lampshades and couches and so forth, so i don't THINK it's the first thing you notice. actually, if i had really cared about it, i could have placed my foam bits carefully *ON* the couches, etc; which are completely opaque.

if you look to the right, you see the back of my handstitching which follows the scalloped trim; and again, it's unconcealed. i could've used holbein stitch to make the back look exactly like the front. if it was in the middle of the card, or on a clear transparency, i might have; but it's tucked way into the spine, so i just made sure i started and ended neatly, and took care weaving in my ends.
here's a different clear card that i made in august. this transparency has less printing on it: 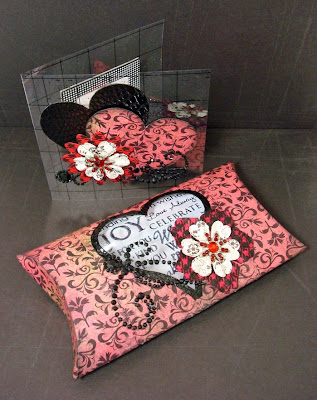 this time, you can definitely see the line of the tombow runner. you can see the hardware end of my brad. you can see the clear gluedot stuff they put on the back of gem flourishes. does it look awful?? ok, i realize it's entirely possible that it DOES LOOK AWFUL to you, in which case i'll have quite helpfully convinced you never to embark on clear cards. you're welcome! :) 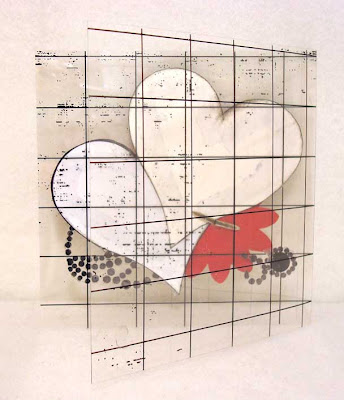 here's an even more glaring example, in a card from last spring (which uses one of gina's AWESOME hand-carved stamps, btw!): 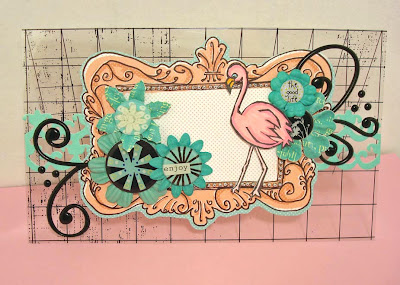 ok, so i made a neat rectangle, which is centered and lines up with the grid. other than that, i am utterly unapologetic. because i happen to LIKE the look of the raised panel on the outside more than i DISLIKE the foam tape on the inside. if martha stewart wants to show up at my door with a tastefully decorated truncheon and the miranda warning embroidered on a cushion, i'll go quietly. whilst you savor that mental picture ask yourself how i got the lace cardstock on there, though... 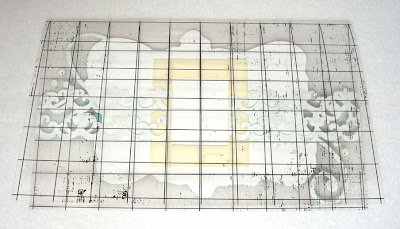 and the answer is: i xyroned it! in my case, more for easy even coverage than anything else. but i think you'll agree, THAT really is verrrrrrrrrry hard to see, even irl. it's probably impossible in the photo. which proves that if you DO care about how the inside looks, the problem is not insurmountable. howsabout a side-by-side (by-side) comparison on a CLEAR transparency:

far right: tombow. VERY visible indeed through the unpatterned acrylic. even i don't care for this.
center: xyron. there's maybe a slight shadow; more of a darkening of the paper color, which is even all-over the shape. i'm fine with it.
left: i've lined up and glued a circle of the exact same size to the inside of the card. they cover each other precisely, so that there is not a bit of glue to be seen anywhere; yep, it's the ultimate disguise. 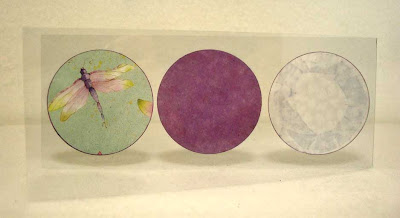 so what have we learned?
that "invisible" adhesive is possible with a little pre-planning?
(sure.)
OR
that visible adhesive isn't the end of the world?
(maybe.)
AND
that lauren will go a long, LONG way to make a blog post outta NUTHIN'?
(definitely!)
**********

*with no disrespect to judy collins, this is one of my all-time LEAST FAVORITE songs. rounding out the top five in this category: "send in the clowns", "midnight at the oasis", "wind beneath my wings", and last, but by no means least, "my heart will go on". of course, merely by mentioning them, i will have every one of these songs stuck in my head for all eternity. i blame celine dion. for all of it. i suspect she's had a hand in global warming, too. somebody call al gore & turn her in, ok?! :)
Posted by lauren bergold at 7:29 AM