a few weeks ago i saw a woman called shoba narayan on television* talking about her book, monsoon diary, which sounded so cool that i was moved to order a nice used copy from half.com.** it arrived, and it is a awesome book: part travelogue, part memoir, part cookbook. what more could you want?? 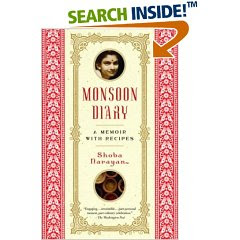 but in fact i did get a bit more: i got myself a teeny tiny mystery, in the form of an interestingly obscure inscription: 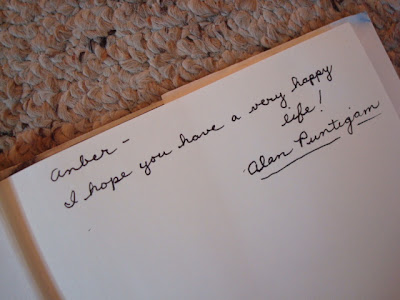 i hope you have a very happy life!

at first i didn't find it too unusual, but the more i think about it, the odder it seems. i mean, "i hope you have a very happy LIFE"?? that sounds really permanent, doesn't it? he's not planning to see her ever again, now is he? ok, so maybe she's moving away... (to india?) ...or he is...but this book was published in 2003, well into the era in which one could be expected to keep in touch, if one wanted to, even internationally. then i thought maybe she was getting married. but it's not addressed to "amber and steve" or "amber and mary" or "the ambersons"; no, it's just to "amber", which is a little odd. a shower gift? but then we've got the matter of HIS name: not "alan" or "uncle alan" or "mr. puntigam"; but "alan puntigam"...so they know each other well enough to be at first names, but he's not sure she will recognize him without his last name, as well.

lovely husband jeff had a great idea: maybe it's an AUTOGRAPH! that explains the wording perfectly, doesn't it? leaving aside the fact that neither of us has ever heard of alan puntigam*** i think it's slightly odd that she would ask her favorite tv star/hiphop artiste/celebrity dentist to sign a *cookbook*. but could he be the editor, or photographer, or ghostwriter or...well, something to do with the production of the book? perusal of the covers, title page and acknowledgements offer no clue to this being the case.

of course, none of this is any of my business, nor does it particularly matter. i have been quite able to continue my normal life undeterred by the suspense of not knowing. but...me being me...i can't help but wonder. so i'm asking:

what do YOU think the inscription means? what is the relationship between amber and alan? what were the circumstances of the book being given? and finally...if you had seen this on your own...would you be wondering or is that just me??! :)

*it may have been on gourmet's diary of a foodie, but i'm not sure

**i buy quite a few of my books from half, and sell a decent proportion of them on afterwards; i like the idea of sharing and re-using stuff in this way

***this happens quite often, actually. in fact, at any given time, 47% or more of the top forty music chart is completely obscure to us, and there are whole genres of tv star of which we have never even heard. i take this to mean we are now officially middle aged; in any case i have googled him with no results except to discover that "puntigam" is apparently quite a common surname in germany. who knew?

Posted by lauren bergold at 8:40 AM