best ever "waste" of paper? 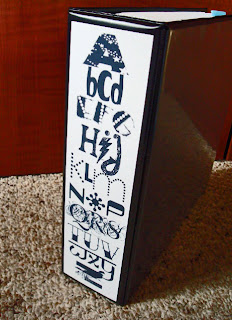 (fonts pictured, from top: wizardry, fishbowl, la hotel viver, the quiet scream, pass the chex, quick-o-meter, chic decay, tattoo ink, samarkan, sidewalk)
ok, this sounds NUTS (even by my standards!) but last year i printed out all of my fonts and put the pages into a notebook.

see? i did say, as you'll recall, "this sounds nuts"! (and you thought i was kidding?!) it's so nuts, in fact, that even *I* could see it, and resisted doing it for six months after i thought of the idea, on the grounds that it would be a gi-nor-mous waste of paper and take forever to do. as it happens i was correct on both counts: it took most of a weekend (every time i was near my computer i sat down and formatted a couple of fonts using a simple template) and used up almost a whole package of (the cheaper, thinner) printer paper.
...BUT...
every single time i sit down to design labels, announcements, or ANYTHING text-based it not only makes it EASIER...it actually saves me a ton of time and test printings and adjusting and fiddling and...well, let's just say that within a week of doing this i was convinced that it was not only NOT NUTS, in fact, for *me* this was an unbelievably helpful idea!
i divided my notebook into sections that reflect my most common font-uses: plain paragraph fonts, funkier paragraph fonts, bolder fonts for headlines, script and italics, all caps, display fonts (really fancy ones that are more of a design element than text; and generally harder to read) and dingbats. 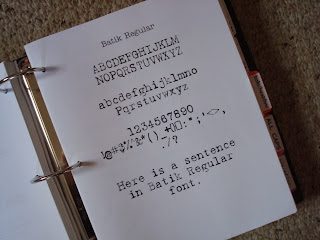 now i'm not saying EVERYONE should do this, but if you happen to be one of those "visual" people (the ones who, if you can't SEE what you have, you might as well not have it...!) this might just help! then there's the fact that free fonts (which constitute probably 99% of my collection) are of varying quality; some having numerals, symbols and punctuation...and some not. if you want to make address labels, the coolest font in the world is utterly useless if it doesn't have numerals, or if they were an after-thought and don't coordinate well with the text! or let's say you're making something fancy for someone called "riley"...no matter how much you love a particular font, if the "R" isn't nice...well, it's not really going to work out, is it?? 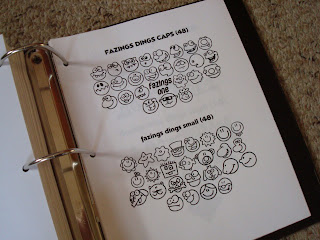 one thing i definitely WOULD recommend to all font-fanciers is to print out all of your dingbats. place the uppercase and lowercase symbols in the same postion each time, and then stick your printouts in a folder. store them with your stamps or your rub-ons, or anywhere convenient, and i guarantee you will start to use them A LOT more often!

but if i see you at staples, buying a binder and an oversized pack of printer paper...don't worry...i won't tell anyone what you're up to! :)

Posted by lauren bergold at 9:35 AM