eat, drink, and be mary! 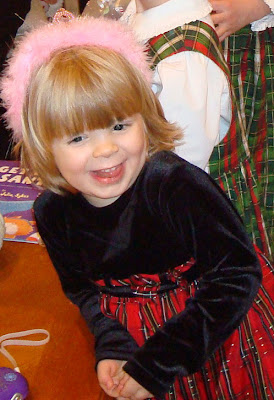 remember this face, folks...she's comin' to a multiplex near you..it's just a matter of time!

here is a cute story my mom told me at christmas. i solemnly swear and aver that it is 100% true.

my mother's church has a rather clever way of staging a nativity play for their pre-school aged children: they choose in advance (& coordinate with the parents of) a couple of the more outgoing kids for the crucial parts (mary, joseph, the wise men) and sketch out a general plan for a few basic actions (mary places the baby jesus in the manger; the wise men bestow their gifts, etc). additionally, a vast quantity of angel and shepherd costumes are made available so that however many or few children arrive on the night everyone who wants to take part may do so. an adult reads the relevant passages from the book of luke, so there are no lines for the kids to remember (or not!), just a few christmas hymns (such as silent night) to be sung by the little cuties at the prompting of the grown-up in charge.

as the holiday drew near my mother mentioned this event to my niece madeline, and asked if maddie would like to come to nana's church and take part. "yes!" said that young lady at once, with great enthusiasm. "i will be mary," she continued, "and matthew can be the baby jesus!"

please note that the three-&-a-half-year-old madeline...without help or prompting from anyone...had immediately sussed out two vital and precocious points:

a) the female lead in the nativity play is clearly MARY
and
b) any actress who can provide the production with an infant brother for the pivotal role of the baby jesus ought to have a leg-up on the casting process!
nana explained that there was already a little girl who 'd be playing the part of mary. madeline expressed the hope that there would be two mary costumes, so that she could wear the other one. after some discussion, the relative merits of shepherds and angels were considered as more viable back-up plans.

the big night arrived. madeline assayed the role of angel with the verve and enthusiasm she brings to everything she undertakes. all instructions given by grown-ups were followed scrupulously. carols were sung. photos were taken. a good time was had by all.
on the way home nana praised madeline's performance and asked if she had enjoyed the play. maddie assured her grandmother that it had indeed been a fun and interesting evening, but had just one suggestion:
"next time, nana, let's go to church earlier...so i can be mary!"
Posted by lauren bergold at 9:06 AM