this week's paper adventure prompt is inspired by vincent van gogh's thoughts on art. he wanted to 'leave a certain souvenir to humankind in the form of paintings or drawings not made to comply with this or that school but to express genuine human feeling.' this inspired paper adventure's lovely hostess elise blaha to think about her own "souvenir", and this week, we're meant to (and i quote):

"ask yourself, 'What sort of souvenir am I leaving?'
Your souvenir may not come through any sort of creative work.
It may come from conversations that you have with strangers or your best friends.
Or from how you raise your children.
Or how you interact in the place you work.
Life is art.
How you act contributes to your self portrait."

wow. ok, it's time for a confession on my part: when i read that, my heart sank. see... (this is embarrassing) ...i am just not this deep. nor am i particularly introspective. and i'm *definitely* not a "share-my-innermost-feelings-in-public" kind of gal. so to sum up: when it comes to art journaling...i want to do the ART PART...i'm not so into the journaling.
...BUT...
one of the reasons i decided to embark upon the paper adventure project was to make an effort to put a little more of myself "out there". if, at the end of the year, i still don't enjoy the process i will give myself lifelong permission to never do it again. but in the meantime, i am committed to the idea. however, for this assignment, my thought process was a bit like this, "my souvenir??! yikes! that sounds a lot like my "legacy". i don't think i have a legacy! now what do i do??! it's not like i can run next door and borrow a cup of legacy! i'm going to fail paper adventure and it's only week two!!!"
then i started thinking about a funeral we went to last year, for a friend of jeff's parents. this man was in his mid seventies, but he had never, ever, lost a friend! and they ALL turned up to see him off. his “gang” from grade school were there with their wives. there were people he knew from college and from the navy; coworkers from various jobs; neighbors from everywhere his family had ever lived. people literally lined up to tell funny stories of places they had gone together, and things he had said or done which had become legendary in his family. this man was not rich or famous. he didn’t leave behind a fortune, or a body of literature or artwork, or a list impressive high-profile achievements. by the standards of the world he was an "ordinary guy”. and yet, i could not…and cannot…imagine a better legacy than the one he left.
thinking about all this, eventually i realized that, in fact, i HAD considered what i'd like my "souvenir" to be...i just needed to write it down! so i did. and the result is something of which i am as proud as anything i have ever made. and to think...i almost chickened out! (note to self: spend less time panicking and more time *just doing it!* sheesh!!!) :) 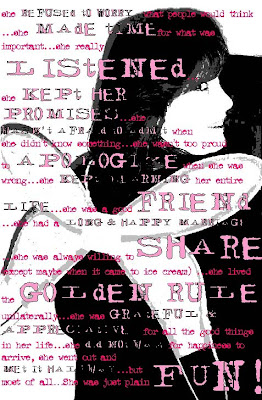 (seriously photoshopped 5 x 7 picture of me wearing niece riley's fairy wings, taken by my sister-in-law; "ghostwriter" and "facelift" fonts; printed on glossy kodak ultima paper)
text reads: she refused to worry what people would think... she made time for what was important... she really listened... she kept her promises... she wasn't afraid to admit when she didn't know something... she wasn't too proud to apologize when she was wrong... she kept learning her entire life... she was a good friend... she had a long & happy marriage... she was always willing to share (except maybe when it came to ice cream!) ...she lived the golden rule unilaterally...she was grateful & appreciative for all the good things in her life... she did not wait for happiness to arrive, she went out and met it halfway... but most of all... she was just plain FUN!


ps: it's only week two...there is still time to catch up...you could do paper adventure, too!
Posted by lauren bergold at 7:52 AM