hooray! it's week three of paper adventure, and not only am i officially caught up...i'm even getting my page in MORE than 24 hours before the deadline. go, me! :)

this week's prompt was, "WHAT'S NEXT?" i went at this one slightly tangentially. (quel surprise!) when i was thinking about the topic, i realized that i occasionally get so focused on what needs to be done that i'm missing out on what's actually happening "in the moment" so to speak! so i think that's something i'll be working on in future.

in the meantime, here is my page. i was actualy looking for something else when i found this little pic of xena, warrior princess in my magazine pictures file, but as soon as i saw it i knew it was exactly right for this! 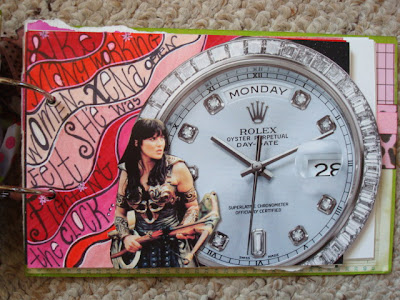 text reads: "like many working women,
xena often felt she was fighting the clock!" 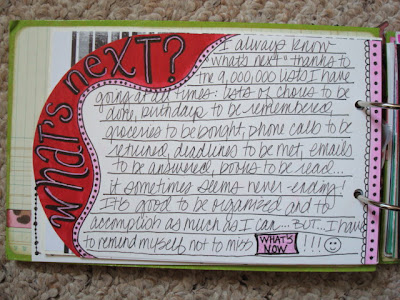 text reads: "i always know 'what's next' thanks to the 9,000,000 lists i have going at all times: lists of chores to be done, birthdays to be remembered, groceries to be bought, phone calls to be returned, deadlines to be met, emails to be answered, books to be read...it sometimes seems never-ending! it's good to be organized and accomplish as much as i can...BUT...i have to remind myself
not to miss WHAT'S *NOW*!!!"

Posted by lauren bergold at 9:33 AM