ahoy be the BIG DAY!

by which i mean international talk like a pirate day obviously, me hearties!!! arrrrrrrrrr!!!!! and bein' such a glorious holiday, o'course i be commemmoratin' it in me ARRRRRRRRRRRRRRT journal: 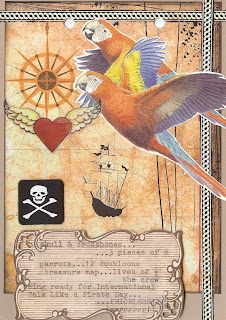 YAR!!!! so obviously the first thing to do whilst embarking upon our new pirately lives is to be a-drinkin' a bottle o'rum and a-hoistenin' up the mainsails!!! (unless we be drivin' obviously. or be havin' to go to work; just because we be pirates doesn't mean we be completely irresponsible !) (arrrr!)
after that, me scallywags, we should probably be a-takin' the official pirate personality assessment test to determine what sort...and more importantly what rank...of pirates we be, mateys! here be my results:
You are The Cap'n!
PROFILE: Some men and women are born great, some achieve greatness and some slit the throats of any scalawag who stands between them and unlimited power. You never met a man - or woman - you couldn't eviscerate. You are the definitive Man of Action, the CEO of the Seven Seas, Lee Iacocca in a blousy shirt and drawstring-fly pants. You're mission-oriented, and if anyone gets in the way, that's his problem, now isn't? Your buckle was swashed long ago and you have never been so sure of anything as your ability to bend everyone to your will. You will call anyone out and cut off his head if he shows any sign of taking you on or backing down. If one of your lieutenants shows an overly developed sense of ambition he may find more suitable accommodations in Davy Jones' locker. That is, of course, IF you notice him. You tend to be self absorbed - a weakness that may keep you from seeing enemies where they are and imagining them where they are not.
What's Yer Inner Pirate? brought to you by
The Official Talk Like A Pirate Web Site. Arrrrr!
**********

next, me old salts, we must be a-gettin' our us official pirate names!!! mine be:
~The Iron Fist~
and a mighty fine name it is too, named after me mother, i were! yarrrrrrrr!
if any of ye scurvy dawgs be a-wonderin' "WHY we are doing this?!" welllllllllll i oughttaaaaaa make ye walk the plank!!! (but there be an excellent explanation here!) (arrr!)
and finally those of us who be a-havin' humorous pirate-based personal photos and/or anecdotes should be a-sharin' of them now: 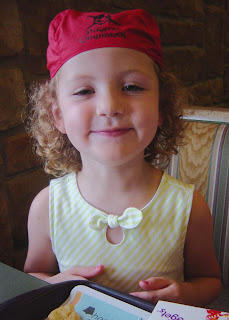 yo ho ho--this be pirate riley! 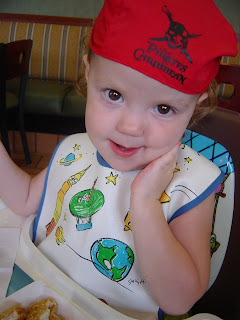 the photos above were taken in the summer of 2006* on a day in which the nieces in question were kind enough to take me out for happy meals. the particular happy meals we obtained accompanied one of the "pirates of the caribbean" films, which of course neither of these young ladies had seen, but they loved "the wiggles" (who have a pirate character) and they have older boy cousins, and thus had a general idea of the concept. so we donned our kerchiefs and enthusiastically said things like, "YAAAAAR!" and "YO HO HO!" and called each other landlubbers and generally exhibited as much hearty pirate mise-en-scene as very small girls & a middle-aged aunt can muster; then we commenced to eating our lunch and resumed normality. or so i thought. until about ten minutes later, when miss lindsay, unprompted, and still using the gravelly-est pirate voice you can imagine a not-quite-3-year-old assaying, asked her mother to,

because a life of plunder and pillaging upon the high seas is no excuse for bad manners!

*i only know this b/c... flying in the face of a lifetime of "winging it" ...i am smart enough to DATE every single file & cd & envelope of photos. if you had asked me about the pics above, i'd have said, vaguely (& incorrectly) that they were from last year sometime...possibly spring?? see...you THINK you're gonna remember who did what, when, and where. you're wrong. label EVERYTHING! oh yeah...and when your friends have kids, and you write their birthdays on the calendar? write THE YEAR on there. and carry it forward to each successive year. b/c if you don't, i guarantee at some point you will write "happy fifth birthday" on the (infinitely more grown up, obviously) 6 year old's card, or ask an 8 year old how he is enjoying first grade. whereupon you will be met with the stare of polite but silent loathing from said child, whose pride you have mortally wounded for all time. it may not be mentioned again...but it'll never EVER be forgotten. trust me. TRUST ME. here endeth the first lesson. (oh yeah...and ummm...arrrrr!) :)

Posted by lauren bergold at 7:59 AM