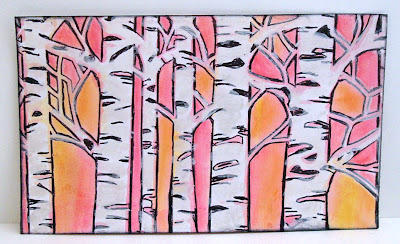 card#54: paint
i almost threw this one away. because, seriously, when i had only done the background paint-through-stencil part, it looked totally lame and not at all like birch trees, and i was pretty disappointed. luckily, the only rule i made for myself in ICAD was: "just keep going!"; and since i couldn't toss it out and start over, it meant that i did just keep going... and thus i learned that some stencils really need a bit of outlining, too; and insipid paint backgrounds can be intensified with chalk or ink; and that metallic pearl white paint when applied messily over uniball pen really does start to look like birch bark and... well, let's just say it was a good night for LEARNING STUFF and this is now one of my all-time faves! 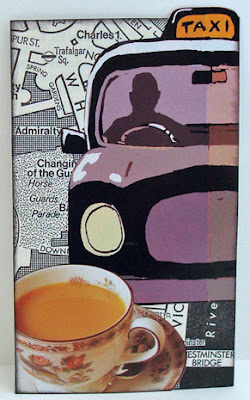 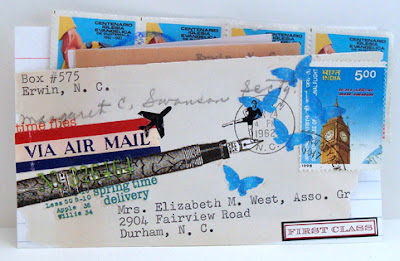 card#56: mail art
i found this envelope and its typewritten carbon paper invitation to "love and loyalty night" (erwin, nc; feb 8th, 1962) stuck in a book i got at a rummage sale. i wanted to make something with it, but it had to be something *I* would get to keep, lol; so here it is. mrs. margaret swanson, erwin chapter secretary, your work lives on and i salute you! 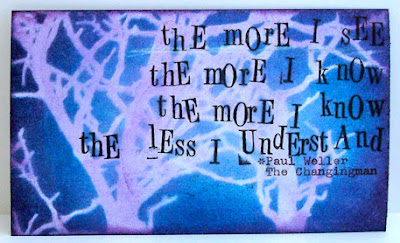 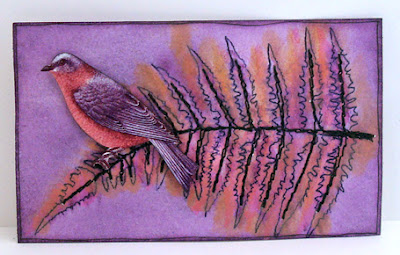 card#58: bird
more inky, stencilly, blendy essperiments. i'm getting better and using a light touch to avoid "ink lines" when i change color. i've learned that hairspray will set chalk, whilst at the same time lightly bleeding the ink from a uniball pen; and that wonky stitching (plus papaya clip art) will cover a multitude of sins! 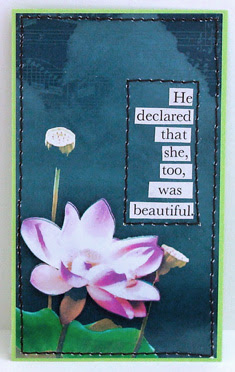 card#59: payne's grey
this is based around an extra print i had of a digital collage i made, which just happened to have the exact right color background! it was going to be a LOT more layery and complicated, but when i got the words on there they decided they wanted to be the star of the show. so i let them.

i was very excited this week to have my "happy day" card featured at laurel seabrook's "inspired by" challenge (ta v much, missus!) and also randomly selected to win $10 worth of basic grey goodies on the BG blog; plus, i got a shout out at unscripted sketches (thank you, ladies!) for the "ooh la la" card i made for this week's "something new" challenge at shopping our stash!

speaking of which, i happen to know that the upcoming challenges at both SOS and city crafter this tuesday are going to be pretty awesome, so i hope you'll stop back and see my cards*!


*in one of them you'll be able to see the direct line between ideas i thought about/played with in these ICADs and a "finished product" of which i am quite proud; because while it's true that process IS more important than outcome; practice and experimentation in the "process" phase can later affect, or even improve your outcome... just sayin'...
Posted by lauren bergold at 1:00 PM