can you believe how quickly july has flown by?! they say that's what happens when you're having fun, which explains how we are already into my last week as guest designer at the city crafter challenge blog, where i have been having such a total blast with that talented gang of crafty gals!!!

this week the challenge is called SOLID AS A ROCK by which the lovely miss kirsty means we're to eschew patterned paper entirely (YIKES!) and concentrate on solid color cardstock!!! of course we can use whatever inks, stamps, stencils and embellishments we want... we just have to start off with a blank canvas; and that is what i did-- literally-- i took some fabulous sticky back canvas, one awesome aspen tree stencil and a wholllllllllllllle lot of blue inks, and after several hours of painty, inky, marker-outlining fun, i had this: 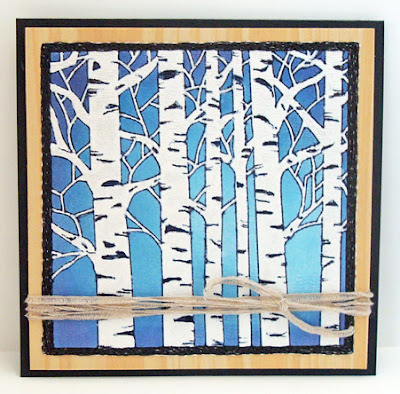 i know, i know, it's not a very layered or very "laureny" card, is it? but seeing as how i'd already had a "practice go" on one of my ICAD cards, the stenciling came out so well that i hated to add much to it! so i just matted the trees on a panel of genuine (but very thin) wood veneer, machine stitched in black all the way to the edge of the canvas, and at the end tied some seriously ancient basic grey fibers around it. the black card base is core'dinations "black magic" so the interior of the card is one of the medium shades of blue from the front.

whenever you are talking about texture and/or shimmery paint, it's IMPOSSIBLE to get a photo which really show the effect properly; or at least it is whenever *I* am talking about those things and left in charge of the photos, lol! so clearly this one doesn't either, but you can at least (kind of) see that there IS an effect, which makes the bark of the trees look rather realistically both rough and translucent; and in real life it looks pretty awesome: 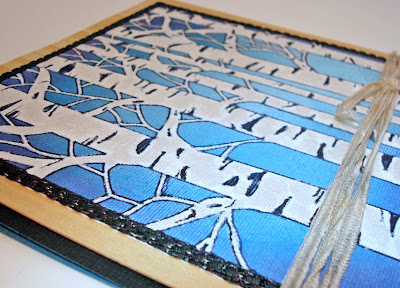 of course, you're all invited round to see it in person, just let me know when you're coming, so i can stock up on creme de menthe and beef jerky! :) in the meantime, i hope you'll stop over at CCCB and see the amazing design team creations and start plotting ♥YOUR♥ bid for world cardstock domination!!!
Posted by lauren bergold at 12:01 AM