i was missing the monstas!

and it's quite a long time until next christmas, so i figured i'd break them out for our nephew's birthday. he's turning 15 and arguably--by uncle jeff's reckoning, anyway-- too mature for this kind of thing; but life has given him an aunt who is definitely NOT TOO MATURE for this kind of thing. as family dynamics go, he's still doin' better than most, i'd say!

i only realized just now, as i went to grab the link, that i inadvertently flipped it during printing. which is why my card is the other way round...but none the worse for it, i don't think: 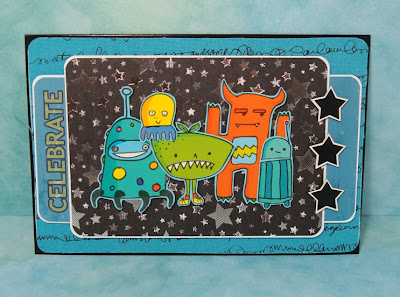 i wish i had preserved the proportions of the sketch a bit better, though. specifically the black and silver star panel is a little too wide in my version, and it makes the card feel slightly crowded. this is what you get for cutting the card base FIRST and being too lazy to get up and get another piece of cardstock. ah well, worse things happen at sea...and in space...yet alien monstas still seem pretty cheerful, don't they? what a good example they set! :)
Posted by lauren bergold at 7:28 AM