i hardly ever mass-produce, unless it's an emergency

which it was: i suddenly realized at 8:30 last night that i didn't have cards for the two friends i will be seeing this afternoon. fortunately i had just seen this week's CPS sketch, which is a corker--i also loved kim moreno's card, on which i based mine: 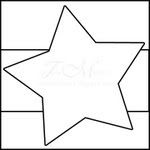 and i knew immediately it was simple enough that i could easily knock a couple of those out using mostly scraps, but they'd still look rather fab. i was right on both counts. see? 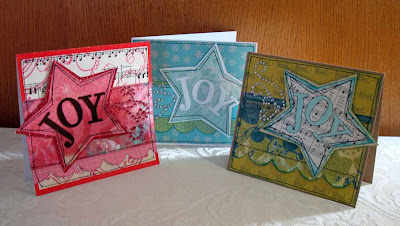 (patterned paper: basic grey, prima, love elsie, dcwv, k&co + some vintage sheet music; glitter cardstock: dcwv & doodlebug; glossy white cardstock: ranger; kraft cardstock: hobby lobby; gem flourishes: prima; velvet letters: making memories; inks: colorbox; flourish stamp: rhonna farrer; adhesives: tombow monorunner, 3m foam tape, sewing machine)
i know what you're thinking. you're thinking, "hey lauren! there are THREE cards in that picture!" well, yeah. the reason being that *three* is the ideal amount of cardstock-weight paper i can hold together and cut out at the same time--pretty much ANYTHING you see that i've handcut has been part of a trio. the ones i don't use at the time get put in the "already cut" folder for quick card or collage making. in this case, since i am WAAAY behind on holiday cards generally, and since i was making two cards and had the extra bits already cut, it seemed quicker to just go ahead and stitch/assemble the third card, to go on the main pile. so i did.

this weekend my plans are to eat, sleep, and make christmas cards...with the first two being considered "optional extras". if you don't hear from me by monday morning, please send martha stewart and a 5-gallon vat of coffee!!! :)
Posted by lauren bergold at 10:44 AM