lemme ask you this: does anyone else ever make a card they totally love...and photograph it...and send it off excitedly to its intended recipient...and then sit practically counting the minutes until said card arrives... (so that it can be posted without blowing the surprise) ...and then--here's the "does anyone else do this" part--i figure everyone has pretty much been with me until now:

totally forget all about it until two weeks later??!??!
this is not the first time i have done such a thing. i suspect it will not be the last time, either. in fact, at some point i will probably stop remembering that i forgot!!! will that be more or less upsetting, i wonder?? hmmmm...

well anyway, i apologize for the MONSTA bad lighting, but hopefully you can get *something* of an idea of the card i made for debb to thank her for the cool goodies she sent me! i typed "thanks" in lots of languages on one of her awesome vintage time cards...and of course there is a MONSTA... (this was officially the first monstacard; in case historians ever ask) ...and a bunch of other stuff. i am pretty sure she won't have received another of these...not ever!!! :) 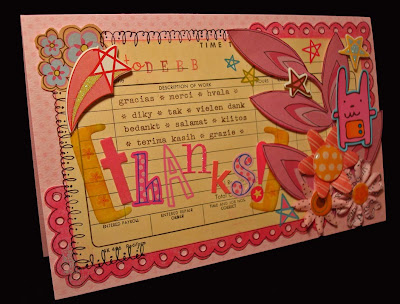