he was born at 12:51 this morning, weighed eight pounds exactly, and measured 21 & 1/4 inches tall...or...well, long, i s'pose. my sister (said baby's mum) is well; the baby--still nameless at the moment--is well; he's got a bit of tufty hair and quite a prominent dimple in his chin...and that's all i know so far. owing to the cold from hell (which came out of nowhere, overnight) i cannot go and visit them tonight. (waaaaaaaahhhhh!) i'm trying to get someone to email me a photo of the little guy, who shares his birthday with both his grandmother and his uncle bill.

in the meantime, here is a photo of said baby's big sister, madeline, from sunday: 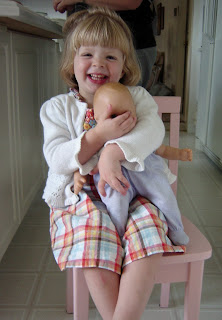 she was--and is--very, very excited about being a big sister! also pictured is her constant companion, "bitty baby"; who, madeline reminded me quite solemnly, would also become a big sister this week. she has been to visit the baby and her mommy this morning and gotten to hold him and admire his fingers, his toes, and his belly. apparently there is not an unkissed spot on the little dude's head!

she is ok with the fact that he is a little brother--even though she very clearly made known her preference for a little sister over the past months! (do adults not listen??) however stumped the grown-ups may be on the subject of names, maddie has no such puzzlement. she told me confidently on sunday that the baby was going to be a girl and named ariel! when prompted by her mother on the (surely unlikely) eventuality of a boy, she was willing to settle for (& i absolutley promise you i am not making this up!) sebastian, prince eric, or flounder!!! i suppose we should just be grateful that her favorite movie is not the power rangers, or muppets from space!!!

Posted by lauren bergold at 1:20 PM

Email ThisBlogThis!Share to TwitterShare to FacebookShare to Pinterest
Labels: photos