it came from the attic (of doooooooom!)

in addition to enough cardboard boxes to supply elementary school children everywhere with dioramas in perpetuity AND the world's third foremost collection of cobwebs; last week, up in the attic, i found this: 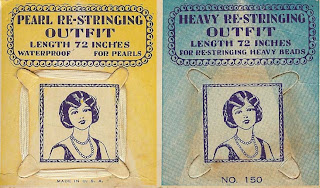 it was in with my grandmother's sewing machine & accoutrements. the machine itself is a 1970's sears kenmore no-frills model that i use...well, once in a blue moon b/c i'm crappy at sewing (yes, even on paper!) and it's heavy as lead. the rest of the supplies were pretty standard: thread, replacement needles, extra bobbin thingies, and a button-hole-making attachment that i am never, ever, going to figure out, much less use. (count this as fair notice, darlings: should the future of the free world itself depend upon *me* successfully making buttonholes, we are OUT OF LUCK!) (...on the other hand...i have some o' that self-adhesive velcro stuff...)

the "pearl re-stringing outfit" is sitting on my desk now, with some of my other treasures-- postcards, of course, both new & vintage; a little notecard that jen made; a gluestick that has a cowboy hat & boots on it (from my friend beshka, in texas); some adorable red felt cherries--for reasons that utterly mystify lovely husband jeff. i've tried to explain why i love it...and things like it...and i always fail. "look at the graphics...and that cool font!" i say, with an excitement that lhj would reserve for money found on the street; "isn't it cool that they sold a set of two: one for pearls and one for heavy beads?!" when i get to the part about mom-mom having used one string, and saved the other...for several decades, apparently...i come closest to gaining his understanding, but really that's cheating a bit, because sweet as that fact is, if i had found this in your attic, i'd be just as excited!

but then, perhaps the loveliest thing about lovely husband jeff is: he doesn't have to get it...to get it! he just smiles, and says, "that's cool, hon!" :)

Posted by lauren bergold at 9:16 AM