we visited my in-laws on saturday, who live near kennett square, pa: mushroom capital of the world! they took us to rockee's mushroom outlet. yes, i was surprised to read, "mushroom" and "outlet" next to each other...but it's just their own little shop where they sell the surplus mushrooms that aren't promised to stores and restaurants. we bought their GIANT "gourmet assortment" which had a pack each of the absolutely freshest and most beautiful portabella, crimini, shitake, maitake, grey oyster and yellow oysters--all for $10.25!!! 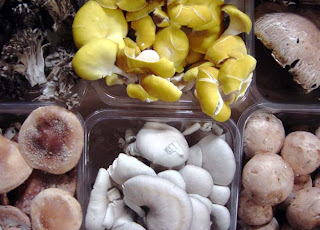 during this trip, i discovered that my mother-in-law does not like mushrooms. not at all. not even a little bit! (she was actually bordering on wigged-out-ness when she saw the maitakes and the yellow oysters. "are you sure those are good?" she asked the girl who was packing them...several times...) how have i known this lovely woman for 20+ years and not realized??! i was quite embarrassed until i realized that her son...my husband...didn't know, either! (how do men do that??!) i spent much of the rest of the day mentally scrolling through meals we have served her over the years, searching for fungus-based delicacies.

yesterday, at home, lovely husband jeff made the world's most rich & lucious mushroom soup (with a recipe from--wouldjabelieve--cooking light magazine!) and a batch of wild mushroom risotto for later in the week. mmm, mmm, mmmmmmmm! ...although i will definitely file these under "do not serve to jeff's mom" in our recipe file...
whilst at rockee's i picked up these little mushroom character stickers...which totally cracked me up! 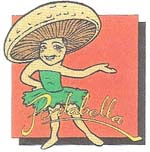 turns out they--and some of their cohorts--are also the subject of coloring pages on rockee's website, and can be found here! :)
Posted by lauren bergold at 8:58 AM