I can never resist a funny meme, especially if it's one for which I have the perfect Eyelet Outlet Brads. In this case our fabulously fancy and righteously regal Crown and Tiara Brads. 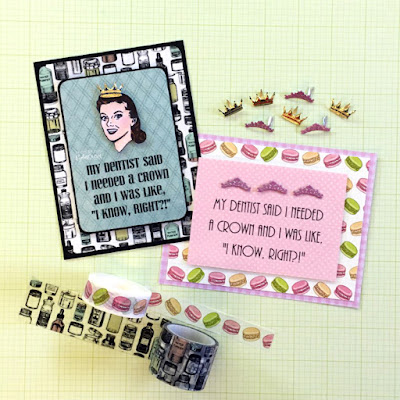 There are actually four styles of Crown and Tiara Brads in each package: two versions of the golden coronet (with both blue and red details); and the pink tiara with both silver filigree and glittery sparkles. On my first card I used one of the golden/blue variety, and placed it on the head of my Riley and Friends stamp, "Midge with Coffee"... although in this case, I cut away the coffee mug (sorry, Midge!) so she'd look more regal. I used one of our fabulous new wide washi varieties, Apothocary Bottles Tape to make a background with a bit of a nostalgic vibe. 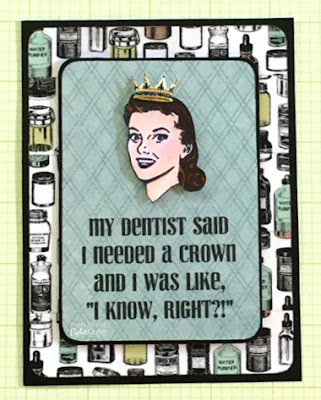 As is often the case when I've seen a meme online, I made a digital sentiment; or rather, two versions of the sentiment, because I wanted both horizontal and vertical format. I used a free chunky font called Vexler Slip for my first card and AR Bonnie for the slightly more streamlined version on my second card. They're both right-clickable here in the post, and will also be available on the Freebies Page of the Eyelet Outlet Blog later this week.

For my second card I wanted to use the pink and silver filigree Tiara Brads, so I made a slightly "lighter" looking sentiment and chose another new tape with nice bright colors, in this case the delicious Macaron Washi. 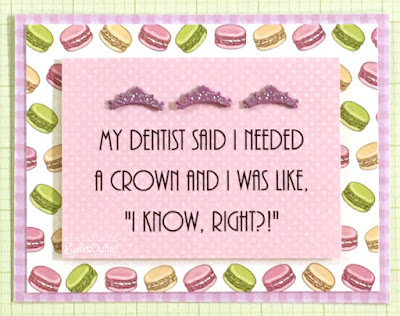 There are a bunch more fabulous new tapes, located at the very beginning of the Washi Tape section; and there are a few amazing new brad styles getting ready to debut soon, so check the EO Blog often for all the updates!
Posted by lauren bergold at 3:00 AM