this week's brief at shopping our stash is not only a FABULOUS one for helping us use up all those extraneous paper scraps... it's also right up my alley.  to wit:


Challenge 51:
use three or more designer papers
(note: that's 3 different patterns... they don't have to be from 3 separate companies!)

being a figure of some repute amongst patterned paper addicts, of course i was excited when i saw this one!* so i immediately devised a plan of attack, which was basically to get out my pink scraps folder and use as much from within as humanly possible! the destination of all this pink and flowery goodness was a large gift bag for niece madeline's upcoming *EIGHTH* birthday, which now looks a bit like this: 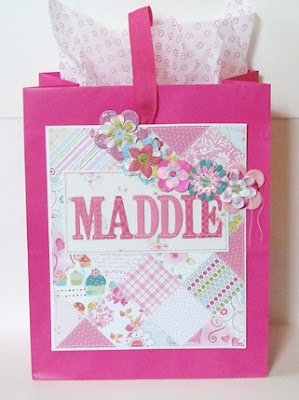 admittedly, i used a few more than three patterns. fifteen more, actually. i think this may be a new personal best!!! ♥♥♥

i used this gorgeous sketch from elle's studio, which i found through the latest "round up" at stampin' when i can; unfortunately it seems to be from LAST week and has already expired, so i can't link up with them, but it was still super-inspiring, as you can see! (for that matter, their current sketch is also fab!) 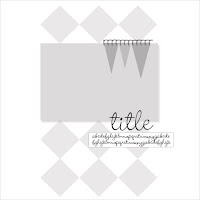 i had sooooooooooo many cool scraps that i decided to fill in the whole 8.5 x 11" page... (i later trimmed about an inch off to fit the bag better) ...with a sort of patchwork effect, and then i stitched back and forth along each edge to enhance the "quilt" feeling. 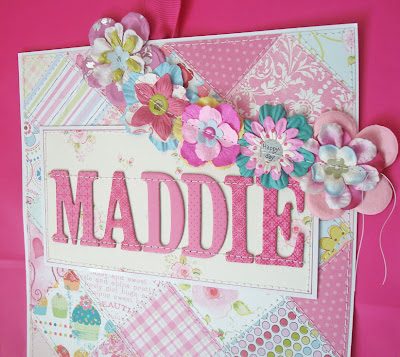 at the end i added the birthday girl's name, and fashioned a little garland out of stacked florals in same sorts of colors as the papers. each one has an epoxy center (instead of a brad or a rhinestone) so that i could stitch over those, as well! as a matter of fact, i had sooooooooo much fun stacking and combining my (rather neglected of late) stash of small and medium paper flowers that i think i'm now as smitten with them as when i saw my first bottle of "got flowers" in a scrapbook store! prepare for an upcoming bout of "flower mania", darlings!!! ;)

i hope you will think of a fun way to use three (or MORE!) of ♥YOUR♥ patterned paper scraps this week and link up with us at shopping our stash!

*for the record, i am equally excited about NEXT WEEK, seeing as week 52 will mark SOS' first birthday!!! obviously a SPECIAL challenge is called for... and we have a GREAT one!!! ♥♥♥
Posted by lauren bergold at 7:30 AM

Email ThisBlogThis!Share to TwitterShare to FacebookShare to Pinterest
Labels: cards, shopping our stash