i don't know WHAT happened here...

my card for this week's city crafter challenge--week #107--that is. for which the lovely ros requests we use both tulle AND text. those being two of my FAVORITE ingredients, i dove right in. i was planning to make something soft and romantic with a bit of a "shabby chic" feeling to it--not unlike miss ros' card, come to think of it. but that's not what happened. it's not even close, actually. what happened was a bit more on the funky grungy side. like this: 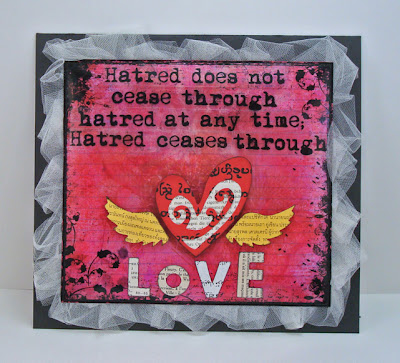 yeah. it's kinda weird. but in a GOOD way. i think. probably. i think i like it... but at the moment i confess it's sooooooo far away from the picture that was in my head when i set out that my eyeballs haven't quiiiiiite caught up.

it was an absolutely blast to make, however: i did a LOT of stamping and masking and inking... and then covered almost all of that up in the end, and fitted my words on a transparency that got layered over the top of my super-artsy background. i've used a bunch of different foreign text papers to make my diecuts, and i think they came out well. i LOVE the way the tulle looks as a frame, i'll definitely be doing that again. and since this might be my favorite quote of the buddha, just spending the time thinking about, playing with, stamping (later covering up) and then typing and formatting those words was "worth the trip" so to speak. another one for the "point three"* file? hmmmmmmm... i'll let ya know, darlings! ♥♥♥

*point three of bruce mau's incomplete manifesto for growth: process is more important than outcome. thank you yet again, bruce, that has helped me every single day for the last two years!!!
Posted by lauren bergold at 11:00 PM