embossing around the christmas tree

so i'm thinking you are probably WAY ahead of me already, and have guessed that this week at ♥JINGLE BELLES♥ we're asking you to create a holiday card which features embossing. it can be of the "dry" variety, made by using an embossing folder (or stencil and stylus!) or the "stamped" variety obtained by using embossing powder and a heat gun. for that matter, you could use a scoring board to create a texture, or one of those "old school" corrugating thingies... or heck, even grab up some of those pretty pre-embossed papers i've seen out there! as always, we long to see YOUR take on this, so if you can think of a way of embossing which i haven't mentioned, that's probably fine, too! :)

i decided to do a couple of things, one of which (if you know me at all) will shock you: i've done A TECHNIQUE!!! even though it involved a *LOT* of steps, including watching a whole entire jennifer mcguire video, and THEN stamping, and THEN unearthing my prehistoric heat gun and clear powder to emboss, and THEN using about six different colors of ink and blending until my arm ached, the emboss/resist method is no longer a stranger to yours truly! 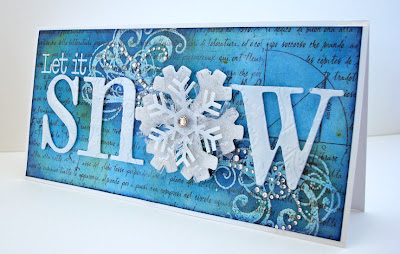 my card is as direct a translation of jennifer mcguire's inspiration card as it was possible for me to create once i realized I DON'T HAVE ANY SNOWFLAKE STAMPS! which, admittedly, was a bit of a stumper, until it occurred to me that i do have lots of OTHER types of snowflakes and my inkiness could consist of the swirly, flourishy gust of wind that was blowing some of them into my title. or whatever.

the other potentially big setback was when i discovered that my ANCIENT embossing ink, which goes on pale blue, but then dries clear when you emboss it... (OR SO I THOUGHT!!!) ...actually goes on pale blue, but then dries pale blue when you emboss it!!!  luckily, i was planning to do the background in blues and greens anyway, and i had the nice bright white letters to stand out against that.

just in case i hadn't managed to quite pull off said inky hijinks, i'd already developed a backup plan: i had dry-embossed the pearly white acrylic letters that make up the rest of the word "SNOW" using a paisley embossing folder. you might need to embiggen (as leslie would say) the photo to see it, but in real life it gives them a subtle but much more noticeable texture that i really like!

and that concludes my adventures in technique... at least for the moment! ;) now i cannot wait to see what ♥YOU♥ will do, so please link up with us at  JINGLE BELLES between now and wednesday, may 16th!
Posted by lauren bergold at 12:05 AM