go HOG WILD on your birthday!

guy cards are HARD. they just are.
i used to think it was just me-- being a fan of all things pink and frilly and flowery and sparkly-- having trouble adapting stylistically, but i've heard too many other amazing cardmakers of every stripe say the same thing, so i think it may just be empirically true. thus, when i set out to make an especially important guy card, i like to arm myself with a secret weapon! such as this week's unassailably AWESOME sketchy thursday sketch: 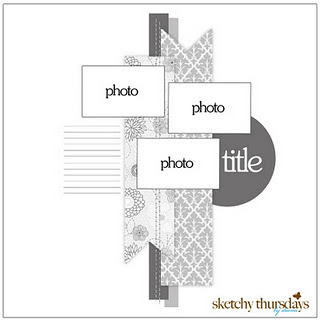 yeah. how *FABULOUS* is that??! (told ya!) :)
i also like to have a bit of a "concept" if possible. because whereas with feminine cards one can ofttimes skate by with amazing eye candy in the form of product; i think you need an idea or a joke or... something... to make a guy card really work. since this card is for my b-i-l's imminent fiftieth birthday, and he is a big fan-- and owner of-- harley davidson motorcycles, i thought that'd be a good way in. then i thought of a (IMO) cool catchphrase and it all came together: 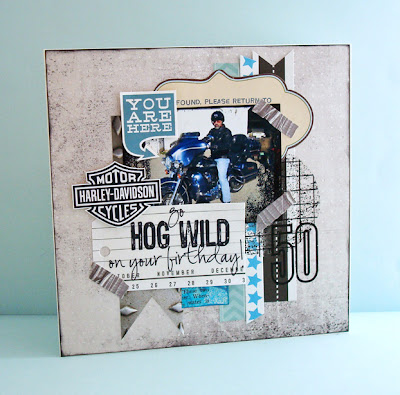 (patterned paper: basic grey, dcwv, ek success/harley davidson, sei, ki; stickers: pebbles; rub-ons: making memories, glitz, heidi swapp; journaling cards: k&co, little yellow bicycle; other: photo & HD logo printed on kodak premium photo paper; sentiment printed on staples' clear inkjet labels; fonts: 4990810 & susie's hand)
ok, so the sketch is rather compressed in my version, but i *THINK* you can see it! this is a 7" card, and yet i still nearly ran outta room at the end!!! in my defense, i wanted the photo & sentiment to be a decent size so you could see them; but i probably should've scaled them down just a teeny bit more. i had originally intended to make the card entirely black, white, and blue, but then i found scraps of the harley-davidson licensed diamond pane paper, and obviously i had to use that... and also it occurred to me that *GREY* is actually the perfect color for 50th birthday cards, lol!!!
in my original plan the "you are here" icon... (which came from a set of travel-themed rub-ons i stumbled upon whilst searching for something else entirely) ...pointed at the "50"; but somehow in gluing up i must've shifted the bits and on the finished card it just DID NOT FIT where i wanted it to. ah well. i think it's ok where it is... 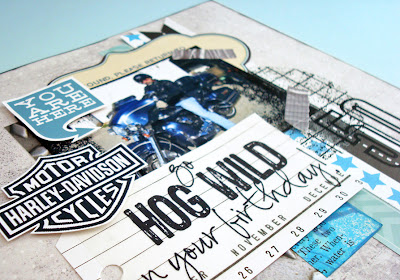 for that matter, i am not usually the kind of cardmaker who will put your age on the front of your card in big black numerals! but this particular guy beat an especially nasty type of cancer a couple of years ago, and since then our family has been pretty darned happy about larger-number birthdays, so i really wanted to make a point of it. perspective really is *EVERYTHING* darlings, don't you think??! ♥♥♥
Posted by lauren bergold at 9:52 AM