here's a card with which i'm not 100% happy, but i think in the future when we look back and ask, "where did lauren's obsession with combining rub-ons and stitching on acetate begin?" this will be considered "CARD ZERO". because i can see the vast and wonderful possibilities in this realm, my friends, and i've hardly scratched the surface. 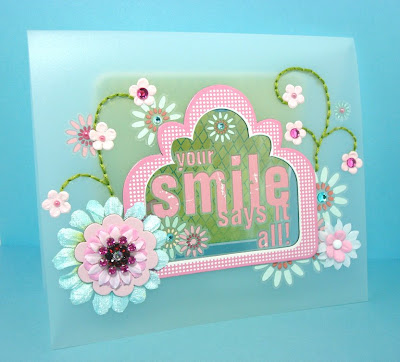 (shortcuts frosted full sheet; colorbok chipboard frame & flower (thanks, june!!!); patterned paper & small florals: prima; rub-ons: my mind's eye; velvet flower & small stick-on gems: k&co fancy brad: paper studio; plain mini-brad: queen & co; stick-on pearls: kaiser)
i made the card out of an 8.5 x 11" frosted sheet from shortcuts* and hand cut the central window with scissors after tracing the cute chipboard frame's opening. i attached a piece of clear acetate (from a potential card which went awry) to the back of the chipboard frame with tombow's "power bond" mono-adhesive runner and embellished it with rub-ons before gluing the completed window to the card.

i drew some simple flourish shapes on a piece of scrap paper, and when i had a design i liked, i used it as a pattern to punch holes in the frosted sheet with a paper piercer. in order to avoid "carrying" thread across the swirly design (or having to end off repeatedly) i used the holbein stitch, which also has the virtue of looking almost exactly the same from the front or the back. (in this case, you can *see* the stitching on the inside of the card, so appearance was a factor.) after running the end of the thread back through my work to secure it, i tacked the end neatly with a tiny drop of diamond glaze.

i can see this technique easily and quickly becoming a mini-obsession of mine...so i apologize in advance for its overuse! don't say you weren't warned, ok?! :)

*i cut the card down to the 5 x 6" size you see here after i had completed all the stitching. i realize this seems wasteful, but having found with the "home sweet" card how much the plastic wants to bend during stitching, i recommend starting large for increased stability whilst you work!
Posted by lauren bergold at 7:18 AM